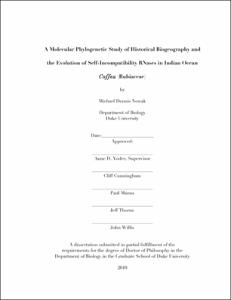 A fundamental goal in the diverse field of evolutionary biology is reconstructing the historical processes that facilitated lineage diversification and the current geographic distribution of species diversity. Oceanic islands provide a view of evolutionary processes that may otherwise be obscured by the complex biogeographic histories of continental systems, and have thus provided evolutionary biology with some of its most lasting and significant theories. The Indian Ocean island of Madagascar is home to an extraordinarily diverse and endemic biota, and reconstructing the historical processes responsible for this diversity has consumed countless academic careers. While the flowering plant genus <italic>Coffea</italic> is but one lineage contributing to Madagascar's staggering floral diversity, it is representative of the common evolutionary theme of adaptive radiation and local endemism on the island. In this dissertation, I employ the genus <italic>Coffea</italic> as a model for understanding historical biogeographic processes in the Indian Ocean using methods of molecular phylogenetics and population genetics. In the molecular phylogenetic study of <italic>Coffea</italic> presented in chapter 2, I show that Madagascan <italic>Coffea</italic> diversity is likely the product of at least two independent colonization events from Africa, a result that contradicts current hypotheses for the single origin of this group.