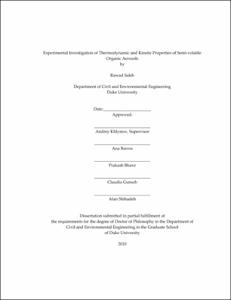 The thermodynamic properties were determined using the integrated volume method (IVM), which relies on measurements of aerosol particle concentrations at different thermodynamic equilibrium states. The measured decrease in particle concentration upon heating in a flow tube, a thermodenuder, can be correlated with saturation pressure and enthalpy of vaporization via the IVM equation, which was derived from fundamental principles, namely the Clausius-Clapeyron relation, mass conservation, and ideal gas law. The main advantage of the IVM over other methods reported in the literature is that the other methods use kinetic-based techniques to measure thermodynamic properties which requires assumptions on the usually unknown evaporation coefficient; the IVM, on the other hand, is equilibrium-based and thus requires no assumption on the evaporation coefficient. We have applied the IVM to C-4, -6, -7, and -9 dicarboxylic acid aerosols, which are pertinent to atmospheric secondary organic aerosols. Saturation pressure and enthalpy of vaporization values obtained for these compounds were respectively 3.7E-4 Pa and 88 kJ/mol, 3.4E-5 Pa and 135 kJ/mol, 7.2E-5 Pa and 149 kJ/mol, and 1.4E-5 Pa and 145 kJ/mol.

We have investigated three controversial issues associated with the IVM as well as other methods which utilize thermodenuders and/or aerosol generation by spray atomization and drying: 1) equilibration time scales in thermodenuders, 2) the need of an activated carbon (AC) denuder in the cooling section, and 3) the effect of residual solvent on measured thermodynamic properties of aerosols generated by spray atomization and drying. Both numerical simulations and experiments showed that the aerosols approached equilibrium within reasonable residence times (15 s - 30 s) for aerosol size distributions typical for laboratory measurements. We have also performed dimensional analysis on the problem of equilibration in TDs, and derived a dimensionless equilibration parameter which can be used to determine the residence time needed for an aerosol of given sized distribution and kinetic properties to approach equilibrium. Using both model simulations and experiments, we have shown that with aerosol size distributions relevant to both ambient and laboratory measurements re-condensation in the cooling section, with and without an AC denuder, was negligible. Thus, there is no significant benefit in using an AC denuder in the cooling section. To investigate the effect of residual solvent on measured thermodynamic properties, we compared measurements of saturation pressure and enthalpy of vaporization of C-6 (adipic) and C-9 (azelaic) dicarboxylic acid aerosols generated by atomization of aqueous solutions to those generated by homogeneous condensation using a modified Sinclair - La Mer generator. We found no statistically significant difference between the tested aerosol generation methods, indicating that residual solvent carried by the particles had no impact on the measurements.