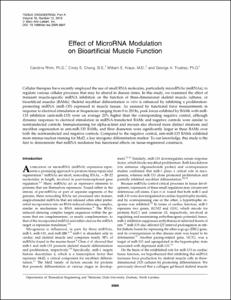 R. Eugene and Susie E. Goodson Distinguished Professor of Biomedical Engineering
My research interests focus upon the effect of physical forces on the function of vascular cells and skeletal muscle, cell adhesion, and the design of engineered tissues.  Current research projects examine the  effect of endothelial cell senescence upon permeability to macromolecules and the response to fluid shear stress, the development of microphysiological blood vessels and muscles for evaluation of drug toxicity and the design of engineered endothelialized blood vessels and skelet
Alphabetical list of authors with Scholars@Duke profiles.