Evaluating the Economics of Power Market Restructuring in North Carolina 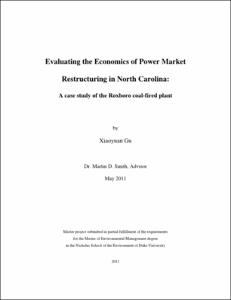 View / Download
2.2 Mb
Date
Author
XIAOYUAN, GU
Advisor
MARTIN, SMITH
Repository Usage Stats
222
views
995
downloads
Abstract
In the last century, the electric power market has been transformed to be more competitive around U.S. Several states have deregulated the industry and expect lower energy prices and higher social benefits to result. However, the electric industry is still operated in a regulated market in many states, including North Carolina (NC). Proposals for power market restructuring have been declined by governments for more than ten years and the legislation and utility commission of North Carolina is still under investigation. This master project is designed to evaluate the costs and benefits of power market restructuring in NC from the perspective of suppliers using a case study of a coal-fired plant. It uses the Roxboro plant, which belongs to Progress Energy. The basic Cost-Benefit Analysis model and sensitivity analysis considering uncertain energy prices and sales amounts have been conducted to estimate the power plant’s annual net benefit and total Net Present Value in the next two decades under three scenarios. The results indicate that integrating the Roxboro plant into a competitive market will bring the most profits, while merging to Duke Energy and keeping operation in a regulated market will bring the least ones. However, further studies including financial and environmental performance, transmission expansion and other major related factors are necessary for the analysis about power market restructuring’s influence at the company scale.
Type
Master's project
Department
Nicholas School of the Environment and Earth Sciences
Subject
power market, restructuring
Permalink
https://hdl.handle.net/10161/3613
Citation
XIAOYUAN, GU (2011). Evaluating the Economics of Power Market Restructuring in North Carolina. Master's project, Duke University. Retrieved from https://hdl.handle.net/10161/3613.
Collections
More Info
Show full item record