Neighborhood Influences on Health among Black and White Adults 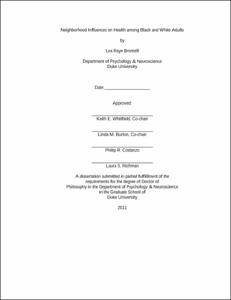 The study included 5,600 whites and 321 blacks who participated in the first wave of the National Survey of Midlife Development in the Unites States (MIDUS I). The age range of the sample was 20-75 (mean= 47.14 years) and roughly half of the participants were male (47.4%). Data on the neighborhood (including safety, physical conditions, social cohesion, and homeplace), health-related self-efficacy, health behaviors, and the health outcomes of self-rated health, obesity, and cardiovascular disease were collected through telephone interviews and self-report questionnaires.