Unthinkable: Mathematics and the Rise of the West 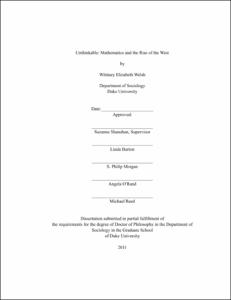 This dissertation explores the ideational underpinnings of the rise of the west through a comparison of ancient Greek geometry, medieval Arabic algebra, and early modern European calculus. Blending insights from Thomas Kuhn, Michel Foucault, and William H. Sewell, I assert that there is an underlying logic, however clouded, to the unfolding of a given civilization, governed by a cultural episteme that delineates the boundaries of rational thought and the accepted domain of human endeavor. Amid a certain conceptual configuration, the rise of the west happens; under other circumstances, it does not. Mathematics, as an explicit exhibition of logic premised on culturally determined axioms, presents an outward manifestation of the lens through which a civilization surveys the world, and as such offers a window on the fundamental assumptions from which a civilization's trajectory proceeds. To identify the epistemological conditions favorable to the rise of the west, I focus specifically on three mathematical divergences that were integral to the development of calculus, namely analytic geometry, trigonometry, and the fundamental theorem of calculus. Through a comparative/historical analysis of original source documents in mathematics, I demonstrate that the logic in the earlier cases is fundamentally different from that of calculus, and furthermore, incompatible with the key developments that constitute the rise of the west. I then examine the conceptual similarities between calculus and several features of the rise of the west to articulate a description of the early modern episteme.