Osmolyte-induced folding of an intrinsically disordered protein: folding mechanism in the absence of ligand. 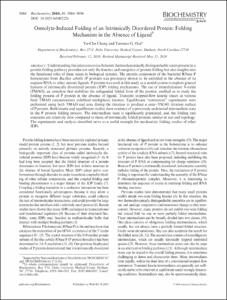 View / Download
3.1 Mb
Date
Authors
Chang, Yu-Chu
Oas, Terrence G
Repository Usage Stats
241
views
322
downloads
Abstract
Understanding the interconversion between thermodynamically distinguishable states present in a protein folding pathway provides not only the kinetics and energetics of protein folding but also insights into the functional roles of these states in biological systems. The protein component of the bacterial RNase P holoenzyme from Bacillus subtilis (P protein) was previously shown to be unfolded in the absence of its cognate RNA or other anionic ligands. P protein was used in this study as a model system to explore general features of intrinsically disordered protein (IDP) folding mechanisms. The use of trimethylamine N-oxide (TMAO), an osmolyte that stabilizes the unliganded folded form of the protein, enabled us to study the folding process of P protein in the absence of ligand. Transient stopped-flow kinetic traces at various final TMAO concentrations exhibited multiphasic kinetics. Equilibrium "cotitration" experiments were performed using both TMAO and urea during the titration to produce a urea-TMAO titration surface of P protein. Both kinetic and equilibrium studies show evidence of a previously undetected intermediate state in the P protein folding process. The intermediate state is significantly populated, and the folding rate constants are relatively slow compared to those of intrinsically folded proteins similar in size and topology. The experiments and analysis described serve as a useful example for mechanistic folding studies of other IDPs.
Type
Journal article
Subject
Bacillus subtilis
Bacterial Proteins
Circular Dichroism
Kinetics
Ligands
Methylamines
Protein Folding
Spectrometry, Fluorescence
Thermodynamics
Tryptophan
Permalink
https://hdl.handle.net/10161/4005
Published Version (Please cite this version)
10.1021/bi100222h
Publication Info
Chang, Yu-Chu; & Oas, Terrence G (2010). Osmolyte-induced folding of an intrinsically disordered protein: folding mechanism in the absence of ligand. Biochemistry, 49(25). pp. 5086-5096. 10.1021/bi100222h. Retrieved from https://hdl.handle.net/10161/4005.
This is constructed from limited available data and may be imprecise. To cite this article, please review & use the official citation provided by the journal.
Collections
More Info
Show full item record Professor of Biochemistry
Our laboratory is primarily interested in the mechanisms of protein folding. We use nuclear magnetic resonance (NMR) and other types of spectroscopy to study the solution structure, stability and folding reactions of small protein models. These include monomeric &#955; repressor, the B domain of protein A (BdpA) and various regulator of G-protein signalling (RGS) domains. Our biophysical studies are used to inform our investigations of the role of folding mechanism in the function of pro