Short-lived alpha-helical intermediates in the folding of beta-sheet proteins. 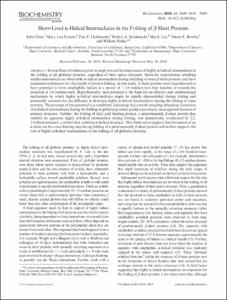 Associate Professor of Surgery
Introduction The increasing number and the improvement in the success of heart and lung transplantation in recent years make now the most exciting time to be involved in research related to the scientific issues surrounding this field. Among those issues, two problems are currently recognized to be the major impediment to the optimal application of transplantation in patients with end-stage cardiopulmonary disease. First, there is a lack of consistent long-term gra Associate Professor in Surgery
1. Transplantation: We have been studying transplantation and organ rejection now for about 25 years. Work through the years has included extensive study of xenotransplantation and aspiration-induced pulmonary rejection, with Jeffrey Platt, Randy Bollinger, Duane Davis, and Shu Lin. New studies with organ preservation and Dr. Andrew Barbas are now underway. 2. Gut immunity: Research has focused on the promicrobial aspects of the immune system. In coll
This author no longer has a Scholars@Duke profile, so the information shown here reflects their Duke status at the time this item was deposited.
Alphabetical list of authors with Scholars@Duke profiles.