DNA Based Self-Assembly and Nanorobotic: Theory and Experiments 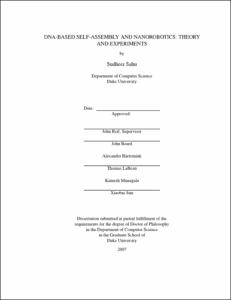 View / Download
1.0 Mb
Date
Author
Sahu, Sudheer
Advisor
Reif, John H
Repository Usage Stats
445
views
794
downloads
Abstract
We study the following fundamental questions in DNA based self-assembly and nanorobotics: How to control errors in self-assembly? How to construct complex nanoscale objects in simpler ways? How to transport nanoscale objects in programmable manner?Fault tolerance in self-assembly: Fault tolerant self-assembly is important for nanofabrication and nanocomputing applications. It is desirable to design compact error-resilient schemes that do not result in the increase in the original size of the assemblies. We present a comprehensive theory of compact error-resilient schemes for algorithmic self-assembly in two and three dimensions, and discuss the limitations and capabilities of redundancy based compact error correction schemes.New and powerful self-assembly model: We develop a reversible self-assembly model in which the glue strength between two juxtaposed tiles is a function of the time they have been in neighboring positions. Under our time-dependent glue model, we can rigorously study and demonstrate catalysis and self-replication in the tile assembly. We can assemble thin rectangles of size k×N using O(logN/loglogN) types of tiles in our model.Modeling DNA based Nanorobotical Devices: We design a framework for a discrete event simulator for DNA based nanorobotical systems. It has two major components: a physical model and a kinetic model. The physical model captures the conformational changes in molecules, molecular motions and molecular collisions. The kinetic model governs the modeling of various reactions in a DNA nanorobotical systems including hybridization, dehybridization and strand displacement.DNA-based molecular devices using DNAzyme: We design a class of nanodevices that are autonomous, programmable, and require no protein enzymes. Our DNAzyme based designs include (1) DNAzyme FSA, a finite state automata device , (2) DNAzyme router for programmable routing of nanostructures on two-dimensional DNA addressable lattice, and (3) DNAzyme doctor, a medical-related application that respond to the under-expression or over-expression of various RNAs, by releasing an RNA.Nanomotor Powered by Polymerase: We, for the first time, attempt to harness the mechanical energy of a polymerase φ29 to construct a polymerase based nanomotor that pushes a cargo on a DNA track. Polymerase based nanomotor has advantage of high speeds of polymerase.
Type
Dissertation
Department
Computer Science
Subject
Computer Science
Permalink
https://hdl.handle.net/10161/443
Citation
Sahu, Sudheer (2007). DNA Based Self-Assembly and Nanorobotic: Theory and Experiments. Dissertation, Duke University. Retrieved from https://hdl.handle.net/10161/443.
Collections
More Info
Show full item record