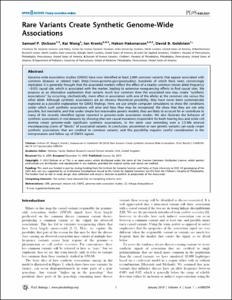 View / Download
2.6 Mb
Date
Authors
Dickson, Samuel P
Wang, Kai
Krantz, Ian
Hakonarson, Hakon
Goldstein, David B
Repository Usage Stats
257
views
192
downloads
Abstract
Genome-wide association studies (GWAS) have now identified at least 2,000 common variants that appear associated with common diseases or related traits (http://www.genome.gov/gwastudies), hundreds of which have been convincingly replicated. It is generally thought that the associated markers reflect the effect of a nearby common (minor allele frequency >0.05) causal site, which is associated with the marker, leading to extensive resequencing efforts to find causal sites. We propose as an alternative explanation that variants much less common than the associated one may create "synthetic associations" by occurring, stochastically, more often in association with one of the alleles at the common site versus the other allele. Although synthetic associations are an obvious theoretical possibility, they have never been systematically explored as a possible explanation for GWAS findings. Here, we use simple computer simulations to show the conditions under which such synthetic associations will arise and how they may be recognized. We show that they are not only possible, but inevitable, and that under simple but reasonable genetic models, they are likely to account for or contribute to many of the recently identified signals reported in genome-wide association studies. We also illustrate the behavior of synthetic associations in real datasets by showing that rare causal mutations responsible for both hearing loss and sickle cell anemia create genome-wide significant synthetic associations, in the latter case extending over a 2.5-Mb interval encompassing scores of "blocks" of associated variants. In conclusion, uncommon or rare genetic variants can easily create synthetic associations that are credited to common variants, and this possibility requires careful consideration in the interpretation and follow up of GWAS signals.
Type
Journal article
Subject
Anemia, Sickle Cell
Genetic Predisposition to Disease
Genome-Wide Association Study
Genotype
Hearing Loss
Humans
Polymorphism, Single Nucleotide
Probability
Risk Factors
Permalink
https://hdl.handle.net/10161/4443
Published Version (Please cite this version)
10.1371/journal.pbio.1000294
Publication Info
Dickson, Samuel P; Wang, Kai; Krantz, Ian; Hakonarson, Hakon; & Goldstein, David B (2010). Rare variants create synthetic genome-wide associations. PLoS Biol, 8(1). pp. e1000294. 10.1371/journal.pbio.1000294. Retrieved from https://hdl.handle.net/10161/4443.
This is constructed from limited available data and may be imprecise. To cite this article, please review & use the official citation provided by the journal.
Collections
More Info
Show full item record

Adjunct Professor in the Department of Molecular Genetics and Microbiology