Structure, function, and phylogeny of the mating locus in the Rhizopus oryzae complex. 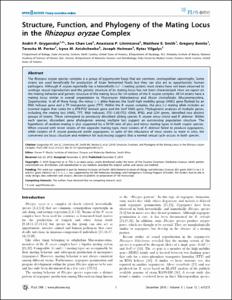 View / Download
732.9 Kb
Date
Authors
Gryganskyi, AP
Lee, SC
Litvintseva, AP
Smith, ME
Bonito, G
Porter, TM
Anishchenko, IM
Heitman, J
Vilgalys, R
Show More
(9 total)
Repository Usage Stats
289
views
1,030
downloads
Abstract
The Rhizopus oryzae species complex is a group of zygomycete fungi that are common, cosmopolitan saprotrophs. Some strains are used beneficially for production of Asian fermented foods but they can also act as opportunistic human pathogens. Although R. oryzae reportedly has a heterothallic (+/-) mating system, most strains have not been observed to undergo sexual reproduction and the genetic structure of its mating locus has not been characterized. Here we report on the mating behavior and genetic structure of the mating locus for 54 isolates of the R. oryzae complex. All 54 strains have a mating locus similar in overall organization to Phycomyces blakesleeanus and Mucor circinelloides (Mucoromycotina, Zygomycota). In all of these fungi, the minus (-) allele features the SexM high mobility group (HMG) gene flanked by an RNA helicase gene and a TP transporter gene (TPT). Within the R. oryzae complex, the plus (+) mating allele includes an inserted region that codes for a BTB/POZ domain gene and the SexP HMG gene. Phylogenetic analyses of multiple genes, including the mating loci (HMG, TPT, RNA helicase), ITS1-5.8S-ITS2 rDNA, RPB2, and LDH genes, identified two distinct groups of strains. These correspond to previously described sibling species R. oryzae sensu stricto and R. delemar. Within each species, discordant gene phylogenies among multiple loci suggest an outcrossing population structure. The hypothesis of random-mating is also supported by a 50:50 ratio of plus and minus mating types in both cryptic species. When crossed with tester strains of the opposite mating type, most isolates of R. delemar failed to produce zygospores, while isolates of R. oryzae produced sterile zygospores. In spite of the reluctance of most strains to mate in vitro, the conserved sex locus structure and evidence for outcrossing suggest that a normal sexual cycle occurs in both species.
Type
Journal article
Subject
Alleles
Crosses, Genetic
DNA Primers
DNA, Fungal
DNA, Ribosomal
Genes, Fungal
Genes, Mating Type, Fungal
L-Lactate Dehydrogenase
Likelihood Functions
Models, Genetic
Phylogeny
Polymerase Chain Reaction
Rhizopus
Sequence Analysis, DNA
Species Specificity
Permalink
https://hdl.handle.net/10161/4588
Published Version (Please cite this version)
10.1371/journal.pone.0015273
Publication Info
Gryganskyi, AP; Lee, SC; Litvintseva, AP; Smith, ME; Bonito, G; Porter, TM; ... Vilgalys, R (2010). Structure, function, and phylogeny of the mating locus in the Rhizopus oryzae complex. PLoS One, 5(12). pp. e15273. 10.1371/journal.pone.0015273. Retrieved from https://hdl.handle.net/10161/4588.
This is constructed from limited available data and may be imprecise. To cite this article, please review & use the official citation provided by the journal.
Collections
More Info
Show full item record Assistant Research Professor in Molecular Genetics and Microbiology
This author no longer has a Scholars@Duke profile, so the information shown here reflects their Duke status at the time this item was deposited.

Adjunct Assistant Professor in the Department of Molecular Genetics and Microbiology Professor of Biology
My scientific work includes traditional and modern research approaches to studying all areas of mycology including systematics, evolution, medical mycology, plant pathology, genetics/genomics, and ecology.  I am best known for my involvement in the transition of fungal systematics from a non-quantitative, largely morphologically based science to the rigorous genome-based discipline that it is today.  For the past 20 years, my lab has been increasingly involved in the study of fungal
Alphabetical list of authors with Scholars@Duke profiles.