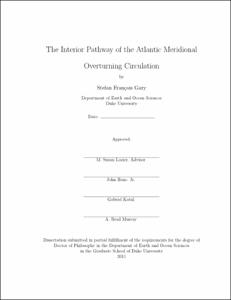 View / Download
16.1 Mb
Date
Author
Gary, Stefan Francois
Advisors
Lozier, M. Susan
Bane Jr. , John
Katul, Gabriel
Murray, A. Brad
Repository Usage Stats
621
views
434
downloads
Abstract
For decades, oceanographers have hypothesized that the Deep Western Boundary Current (DWBC) is the dominant export pathway for the deep limb of the Atlantic Meridional Overturning Circulation (AMOC). However, more recent observations and theoretical work lend evidence for the existence of a second, interior, pathway for the AMOC deep limb. In order to assess the impact of the interior pathway relative to the DWBC pathway, this work seeks to quantify the AMOC deep limb pathways in ocean circulation models, compare the pathway signatures of these models to observations, and identify a mechanism driving the interior pathway. The partitioning of the AMOC deep limb into interior and DWBC pathways is observed in several ocean models. Furthermore, there is a good agreement between the structure of the export pathways in models and observations. Both Eulerian and Lagrangian techniques, in models and observations, are used to identify the DWBC and interior pathways and these two perspectives are shown to be compatible with one another. Finally, deep, eddy-driven, recirculation gyres are shown to be a mechanism driving the interior pathway and the existence of the interior pathway is consistent with the vorticity balance at depth. The interior pathway makes a significant contribution to the total transport of the deep limb of the AMOC. Since the interior pathway is much broader and slower than the DWBC pathway, the large-scale transport of climate signals, heat, and anthropogenic CO2 associated with the AMOC are slower and mixed more broadly throughout the ocean than once thought.
Type
Dissertation
Department
Earth and Ocean Sciences
Permalink
https://hdl.handle.net/10161/4980
Citation
Gary, Stefan Francois (2011). Interior pathways of the North Atlantic meridional overturning circulation. Dissertation, Duke University. Retrieved from https://hdl.handle.net/10161/4980.
Collections
More Info
Show full item record