Seeking the Beijing Consensus in Asia: An Empirical Test of Soft Power 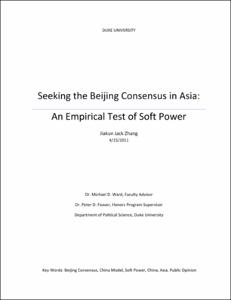 Files
Full text of honors thesis. Figures and Tables in Appendix.
935.2 Kb
Honors thesis presentation slide deck
869.6 Kb
Date
Author
Zhang, Jiakun Jack
Repository Usage Stats
678
views
4,995
downloads
Abstract
The empirical study of soft power presents a challenge for social scientists. Conventional wisdom asserts that China’s soft power is growing alongside its hard power, but few scholars have been able to demonstrate this phenomenon empirically. This paper represents a first-cut effort at operationalizing and measuring the so-called Beijing Consensus (or China Model), a form of state capitalism which some see as an ideological alternative to the Washington Consensus and a challenge to American soft power. Using public opinion data from the Asian Barometer Survey (ABS), I attempt to empirically demonstrate the appeal of the China Model in Asia. I operationalize the Beijing Consensus both directly, by establishing the relationship between a respondent’s attitude towards Chinese influence and his/her preference for China as a model of development, and indirectly, by measuring attitudes towards China’s influence and attitudes towards democracy. I find that in the Asian countries represented by the ABS, affinity for Chinese influence had negligible impact on the respondent’s desire to adopt the China Model. Furthermore, no relationship could be found between favorable attitudes towards China and preference for democracy. My research shows that those who portray China as an ideological threat to the United States have dramatically overstated their case and must substantiate their position with evidence.
Description
Honors thesis, Winner of the Ole R. Holsti Award in American Foreign Policy and International Relations (2011)
Type
Honors thesis
Department
Political Science
Subject
Beijing Consensus
China Model
Soft Power
China
Asia
Public Opinion
Permalink
https://hdl.handle.net/10161/5383
Citation
Zhang, Jiakun Jack (2011). Seeking the Beijing Consensus in Asia: An Empirical Test of Soft Power. Honors thesis, Duke University. Retrieved from https://hdl.handle.net/10161/5383.
Collections
More Info
Show full item record