Unequal Odds: The Effects of Race and State Context on Recidivism 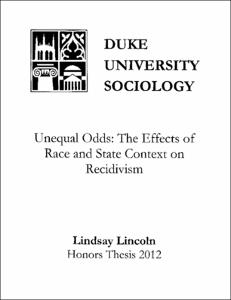 View / Download
1.4 Mb
Date
Author
Lincoln, Lindsay
Repository Usage Stats
343
views
283
downloads
Abstract
Recidivism of Prisoners Released in 1994, conducted by the U.S. Bureau of Justice Statistics, is the most thorough and extensive compilation of official data on recidivism in the United States. It contains criminal history and demographic information on 38,624 prisoners released in 1994 from prisons in 15 states (Arizona, California, Delaware, Florida, Illinois, Maryland, Michigan, Minnesota, New Jersey, New York, North Carolina, Ohio, Oregon, Texas, and Virginia) and followed for three years thereafter. Using these data, I found a significant effect of race on recidivism, such that black males are significantly more likely to recidivate than white males, after controlling for individual-level variables, including age and criminal history, and for structural-level variables, including state of release. I also found a significant effect of state of release on recidivism, which is partially accounted for by the state unemployment rate and the percentage of minority individuals in the state population. The implications of these findings with regard to larger issues of social and economic stratification as well as to policy efforts are discussed.
Type
Honors thesis
Department
Sociology
Permalink
https://hdl.handle.net/10161/5388
Citation
Lincoln, Lindsay (2012). Unequal Odds: The Effects of Race and State Context on Recidivism. Honors thesis, Duke University. Retrieved from https://hdl.handle.net/10161/5388.
Collections
More Info
Show full item record