Anglos' and Latinos' Self-Regulation to Standards for Education and Parenthood 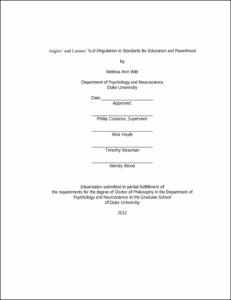 The present research tested whether the lower educational achievement and greater incidence of parenthood among Latino relative to Anglo high school students arise from differences across ethnic groups in the standards held for these behaviors and whether these different standards and differential success across groups at meeting them contribute to ethnic group differences in self-esteem. I tested this regulatory model in two different research designs. In the first study, I used longitudinal data on race/ethnicity and attitudes, expectations, and behavioral outcomes for education and parenthood from the National Longitudinal Study of Adolescent Health (Add Health, Udry, 2003). In the second study, I used an experimental design to test the causal mechanisms involved in this regulatory process. I assessed Anglo and Latina adolescent girls' standards in terms of explicit self-report ratings and then prompted them to imagine themselves in scenarios related to education or parenthood. After participants viewed the scenarios, I assessed their self-esteem and affect. In both studies, I anticipated that ethnic group differences in standards for education and parenting would help explain differences in behavioral outcomes for the groups, along with differences in ethnic group affect and self-esteem. These studies provided some evidence that Anglos espouse more favorable attitudes toward education and less favorable attitudes toward adolescent pregnancy than Latinos. As anticipated, adolescents experienced increases in self-esteem and positive affect when they acted in ways that confirmed valued standards.