Senses of Belonging: The Synaesthetics of Citizenship in American Literature, 1862 - 1903 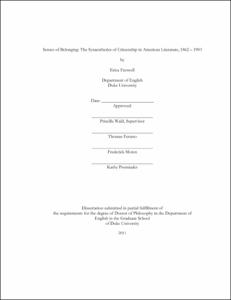 In American letters, the Civil War represented a decisive break in literary form, a shift from interiority to exteriority. Sentimentalism harnessed the transformative effects of aesthetic feeling to galvanize political opinion in antebellum America, whereas realist and regionalist writing's empiricist attention to surface and appearance represented a reaction against sentimentalism. Yet postbellum literature is nothing if not a sustained meditation on how the feeling, sensate body negotiates the abstraction of citizenship and political life.

The paradoxes presented by black emancipation, immigration, and women's suffrage forced what today we consider the period's most canonical authors, from Emily Dickinson to W.E.B. Du Bois, to confront the contradictory feelings provoked by a democratic nation that excluded most of its citizens from their fundamental rights. The taste of Ellis Island, Henry James warned in The American Scene, "will be forever in [the] mouth" of the citizen, who must share "the intimacy of his American patriotism with the inconceivable alien." James's literal distaste for immigrants raises the stakes of what it means to locate the experience of belonging neither inside nor outside the body, but at its sensory orifices, its porous thresholds. The issue of corporeal intimacy manifested in aesthetic forms that made the senses legible across linked areas of nineteenth-century literary production: from the cookbook (Russell's Domestic Cookbook) and local color fiction (Chopin's The Awakening), to utopian novels (Bellamy's Looking Backward), autobiographies (Keller's The Story of My Life) and the apparently tasteless lyric poems about spiritual hunger (Dickinson's poetry). Senses of Belonging seeks to show how postbellum American literature, in all its forms, transformed civic abstraction into a sensate experience.

Senses of Belonging builds on and seeks to advance work on embodied citizenship in the broad area of cultural studies by showing how taste, touch, smell, sight and sound articulate otherwise intangible feelings of national belonging. To do so, each chapter is devoted to a single sensation, thereby placing literary treatment of each sensation in the context of political, scientific, and philosophical debates about citizenship. This structure helps draw attention to how each sense perception uniquely registered the multi-faceted experience of belonging in the wake of the Civil War, the bloodiest event Americans had yet experienced. The project's focus on literary form and sense experience is also historical, as it traces modes of national affiliation from the problem of black emancipation during the Civil War, to the "Negro Problem" during Reconstruction, to what W.E.B. Du Bois famously called the "problem of the color line" at the turn of the twentieth century. This chronological arrangement both reframes existing periodizations of nineteenth-century American literature and adds dimension to what is often referred to as the "Gilded Age."

What emerges from this methodology is a literary analysis of how seemingly disparate and unconnected nineteenth-century American writers shared a central preoccupation with sensory experiences of, and the emotional effects on, everyday civic life. This study crosses disciplinary boundaries in order to chart connections among nineteenth-century writers and thinkers: anthropology, philosophy, and physiology among others. The questions that organize this dissertation are fundamentally literary, for Senses of Belonging demonstrates that the senses do not exist prior to or outside of language, but rather are constituted through literature's rich imaginings.