For love and Fatherland: Political Clientage and the Origins of Russia’s First Female Order of Chivalry 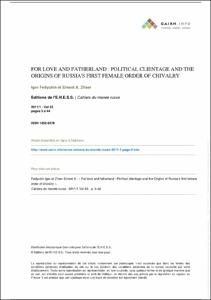 View / Download
1.4 Mb
Date
Authors
Fedyukin, I
Zitser, EA
Repository Usage Stats
366
views
1,481
downloads
Abstract
This article describes the origins and political significance of the Order of St. Catherine, or Deliverance: the second-oldest knightly order in the system of honors introduced during the reign of Peter I, the first Russian monarchical order to have its own set of statutes, and the only one reserved exclusively for women. The foundation of the Order of St. Catherine has traditionally been described as a project driven by, and reflecting the vision of the tsar himself. However, as the newly discovered archival documents analyzed in this article indicate, the key role in this episode actually belonged to Tsaritsa Catherine Alekseevna and her advisors and clients, while the tsar seems to have been at best a passive observer. Although Peter’s dynastic policy and his interest in lay monarchical orders obviously set the overall framework for what was possible, the specific design of this project reflected not the tsar’s will, but the personal agendas of such actors as the royal consort (Catherine), the royal favorite (A.D. Menshikov), and the tsar’s former brother-in-law (Prince B.I. K urakin). A reconstruction of the actual circumstances of the Order’s foundation thus provides the evidence for a detailed case study of the role of political clientage in shaping the scenarios of power at the early Imperial Russian court.
Type
Journal article
Subject
Russian History, Political Clientage, Patronage, Knightly Orders, Chivalry, Prince B. I. Kurakin, Peter the Great, Catherine I
Permalink
https://hdl.handle.net/10161/5736
Citation
Fedyukin, Igor and Zitser Ernest A., «For love and fatherland: Political clientage and the Origins of Russia's first female order of chivalry», Cahiers du monde russe, 2011/1 Vol 52, p. 5-44.
Collections
More Info
Show full item record