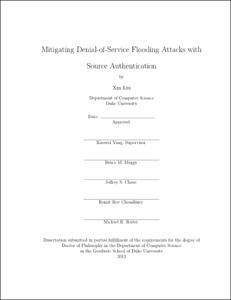 Denial-of-Service (DoS) flooding attacks have become a serious threat to the reliability of the Internet. For instance, a report published by Arbor Networks reveals that the largest DoS flooding attack observed in 2010 reaches 100Gbps in attack traffic volume. The defense against DoS flooding attacks is significantly complicated by the fact that the Internet lacks accountability at the network layer: it is very difficult, if not impossible, for the receiver of an IP packet to associate the packet with its real sender, as the sender is free to craft any part of the packet.

This dissertation proposes to mitigate DoS flooding attacks with a two-step process: first to establish accountability at the network layer, and second to utilize the accountability to efficiently and scalably mitigate the attacks. It proposes Passport, a source authentication system that enables any router forwarding a packet to cryptographically verify the source Autonomous System (AS) of the packet. Passport uses symmetric key cryptography to enable high-speed verification and piggy-backs its key exchange into the inter-domain routing system for efficiency and independence from non-routing infrastructures.

On top of Passport, this dissertation proposes NetFence, a DoS flooding attack mitigation system that provides two levels of protection against the attacks: if a victim can receive and identify the attack traffic, it can throttle the attack traffic close to the attack sources; otherwise, the attack traffic cannot be eliminated, but it would not be able to consume more than the attack sources' fair shares of the capacity of any bottleneck link. NetFence achieves its goals by putting unforgeable congestion policing feedback into each packet. The feedback allows bottleneck routers to convey congestion information back to the access routers that police the traffic accordingly. A destination host can throttle unwanted traffic by not returning the feedback to the source host.

We have implemented prototypes of Passport and NetFence in both ns-2 simulator and Linux. We have also implement a prototype of Passport on a NetFPGA board. Our evaluation of the prototypes as well as our security and theoretical analysis demonstrate that both Passport and NetFence are practical for high-speed router implementation and could mitigate a wider range of attacks in a more scalable way compared to previous work.