Development of Decision-Making Under Risk 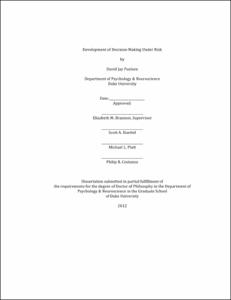 Decision-making under risk has been of interest to philosophers for centuries. in Only in recent years through interdisciplinary approaches has knowledge concerning the descriptive nature of decision-making under risk increased. Although we know that risk-preference proceeds from a risk-seeking trend in childhood to risk-aversion in adulthood, little is known about the factors that contribute this development. The studies presented here take an interdisciplinary approach to identifying the factors that contribute to age-related changes in risk preference, where in the decision-making process these factors have influence, and changes in neural circuitry that could be responsible. The work presented herein finds that risk-preference is differentially modulated across development by risk level, the values of choice options, and the domain (gains or loss) in which options are presented. During valuation, many brain regions that have previously been associated with decision-making and risk were found to increase in activation with age, suggesting the maturation of a decision-making network. Activation in a few key areas were associated with greater risk-aversion in children, suggesting that maturation of the decision-making network leads to more adult-like behavior. The cognitive component of children's greater risk-seeking was not found to be a deficiency in probabilistic reasoning, the ability to learn from negative feedback, or a general optimism for winning. Rather, children's valuation of a gamble may be exaggerated by a disproportionate amount of attention given to the winning outcome of a gamble. It is further speculated that a lack of regret during outcome evaluation may also contribute to differences in children's risk preference compared to adults.