Consumerism and its Discontents: A Cultural History of Argentine Development, 1958-1969 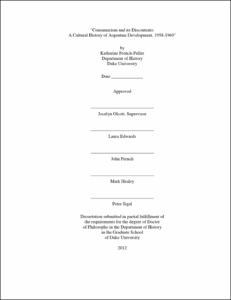 This dissertation explores the quotidian experience of economic development by studying both the material realities and discursive worlds of 1960s Argentina. I reveal the gendered relationship between economic development and an expanding consumer culture by analyzing the use, circulation, and meanings attributed to household appliances by journalists and public intellectuals. In the late 1950s, many economists, politicians, and intellectuals fervently believed they had found an economic model -- developmentalism -- that would finally provide the means of raising Argentines' standard of living and make the Argentine economy as robust as those of the United States and Northern European countries. Household appliances played a key role because they achieved both those goals, (supposedly) improving women's lives in the process by in part facilitating their increased participation in the workforce. Developmentalists believed their economic model to exist independently of ideology and cultural influences, but their model encountered cultural realities that limited its success. Consumerism--the way through which Argentines interacted with development--and its effects on family and gender relationships complicated the process. Both supporters and critics of developmentalism attacked women's roles as consumers to articulate many of their protestations against changes in women's status and to express anxieties about seemingly unrelated social and cultural changes. I argue that through the course of the 1960s the discussion about consumerism increasingly became a way through which different groups offered distinct visions of how "Argentine society" ought to be transformed.

This study draws on a broad array of written and oral sources. To trace the connection between economic development and consumer society, I interweave an analysis of economic and infrastructural data - such as production statistics or the availability of gas, water - with a study of socio-cultural discourses found in a wide variety of magazines, essays, films, and interviews. I juxtapose these sources in unusual ways to demonstrate two things. First, the cross-referencing of disparate sources to reveals a fuller, more complete picture of economic development and its effects--transcending macro-structural phenomenon to offer a view of quotidian change. And, two, this more complete pictures details how a narrative of hope and idealism evolved into one of anxiety and vitriol as the decade progressed.