The Distant Reach of the Middle East: How Perceptions of Conflict Affect Jewish Israeli American and Palestinian American Identity 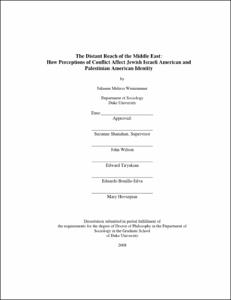 View / Download
729.2 Kb
Date
Author
Weinzimmer, Julianne Melissa
Advisor
Shanahan, Suzanne
Repository Usage Stats
426
views
757
downloads
Abstract
This interpretive study examines how narratives and collective memories about the ongoing Israeli-Palestinian conflict affect the identities of Jewish Israeli Americans and Palestinian Americans today. In contrast to Charles Tilly's (2002) assumption that identity stories and their salience are chiefly generated at the boundary between groups, I demonstrate that perceptions of conflict, and not just direct experience with conflict, are significant in identity formation and maintenance process. To make this argument I bring together several literatures. These include conflict theory, segmented assimilation theory, social memory theory, transnationalism literature and account/narrative/storytelling qualitative methods. I explore perceptions of homeland conflict drawn from various sources, such as direct experiences, stories passed down through the family, media coverage and personal connections in the homeland, and compare the effects these perceptions have on Jewish Israeli and Palestinian American identity. Despite all of the emphasized differences between these seemingly opposing groups, I will show how both Palestinian and Jewish Israeli Americans are greatly influenced by strife in their shared homeland. Both groups are tired of the violence and ready for peace. Beyond this overarching--and all too often overlooked--commonality, there are distinct group-level differences in how conflict shapes identity from afar, by generational status and by ethnic group. For first generation individuals, the major links are having been raised in a society permeated by conflict and maintaining social connections there. The second generation is mainly influenced by the stories imparted upon them by their parents. Palestinian Americans believe they have less choice in having their lives and identities shaped by homeland conflict for three main reasons: first, their experience of having been forcefully exiled and refused the right of return or recognition as a nation; second, the perceived misrepresentation of and bias against Palestinians, Muslims and Arabs in the American media; and third, their belief that their host country, the United States, is supportive of Israel and its military incursions upon the people of Palestine. My claims are substantiated by the twenty-nine in-depth, open-ended interviews I conducted first and second generation Jewish Israeli Americans and Palestinian Americans, all from the Triangle region of North Carolina.
Type
Dissertation
Department
Sociology
Subject
Sociology, Ethnic and Racial Studies
Identity
Israel
Palestine
Ethnicity
Diaspora
Conflict
Permalink
https://hdl.handle.net/10161/611
Citation
Weinzimmer, Julianne Melissa (2008). The Distant Reach of the Middle East: How Perceptions of Conflict Affect Jewish Israeli American and Palestinian American Identity. Dissertation, Duke University. Retrieved from https://hdl.handle.net/10161/611.
Collections
More Info
Show full item record