Phylogenetics of Cystopteridaceae: Reticulation and Divergence in a Cosmopolitan Fern Family 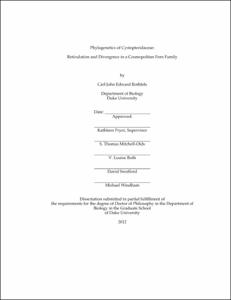 The fern family Cystopteridaceae has been a thorn in the side of fern phylogeneticists, on many levels. Until this thesis, its basic existence (as a deeply isolated clade) and composition were unrecognized, hypotheses as to the relationships of its constituents within the broader fern tree-of-life were wildly inconsistent, the relationships of its genera to each other were contested, the species limits within those genera weakly understood, and the relationships among those species unknown. This thesis first establishes the broad evolutionary context for the family, which is that it is the first-diverging branch in Eupolypods II (it is sister to the rest of the eupolypod II clade). Eupolypods II is a large clade, containing nearly a third of extant fern species, making the Cystopteridaceae's position pivotal to a full understanding of fern evolution.

The evolution of the Eupolypods II is marked by an "ancient, rapid radiation" at the base of the clade, which helps to explain the difficulty that this broad group has historically posed to evolutionary biologists. Molecular data from five plastid loci show that Eupolypods II is comprised of 10 deeply divergent lineages, each worthy of recognition at the rank of family: Cystopteridaceae, Rhachidosoraceae, Diplaziopsidaceae, Hemidictyaceae, Aspleniaceae, Thelypteridaceae, Woodsiaceae, Onocleaceae, Blechnaceae, and Athyriaceae. The ancestors of Cystopteridaceae diverged from those of the rest of the clade approximately 100 million years ago, and the family is now comprised of five extant genera: Acystopteris, Cystoathyrium (the only genus for which we lack molecular data--it may be extinct), Cystopteris, Gymnocarpium, and ×Cystocarpium.

Within the family, the relationships of Cystoathyrium are unknown. Acystopteris is sister to Cystopteris, and those two genera, together, are sister to Gymnocarpium. Gymnocarpium is the maternal parent of ×Cystocarpium, so that genus falls within Gymnocarpium in phylogenetic trees based on maternally transmitted loci (i.e., plastid or mitochondrial loci). Plastid data resolve a basal trichotomy in Gymnocarpium, among the G. disjunctum clade, the G. robertianum clade, and core Gymnocarpium. The earliest diverging branch of core Gymnocarpium is the morphologically anomalous G. oyamense, followed by a split that separates G. appalachianum and G. jessoense parvulum (on one side) from G. remotepinnatum and G. jessoense jessoense, on the other. In Acystopteris, the first division surprisingly separates A. taiwaniana (which is frequently treated as a variety of A. japonica) from A. japonica + A. tenuisecta (which are morphologically very distinct from each other).

The evolution of Cystopteris is, as expected, more complex. The first lineage to diverge from the rest of the genus is the one that gave rise to C. montana. The next division, however, is unclear; molecular data infer a trichotomy among the sudetica clade (containing C. sudetica, C. moupinensis, and C. pellucida), the bulbifera clade (containing C. bulbifera and its related allopolyploids C. tennesseensis and C. utahensis), and the C. fragilis complex. Within the C. fragilis complex relationships (and species limits) get particular messy. The diploid species of eastern North America--C. protrusa--is sister to the rest of the complex, but after that point the major named species (including C. fragilis and C. tenuis) cease to be monophyletic, being found on both sides of a major split, alongside such taxa as the Australian/New Zealand C. tasmanica, the Hawaiian C. douglasii, and the Mexican C. membranifolia and C. millefolia.

In the context of the deep divergence of Gymnocarpium from Cystopteris, and the complicated species-level patterns of relationship within each genus, it is particularly surprising that molecular data confirm that ×Cystocarpium is a hybrid between Gymnocarpium dryopteris and a European tetraploid member of the Cystopteris fragilis complex. The ancestors of Cystopteris diverged from those of Gymnocarpium approximately 58 million years ago, meaning that the ×Cystocarpium hybridization event (which happened very recently) united genomes that contain, between them, over 100 million years of independent evolution. This breadth of divergence makes ×Cystocarpium the most extreme example of wide hybridization currently documented, with important implications for the pace of evolution of reproductive isolation, and thus for species formation.

This thesis ends with a tentative synopsis of the Cystopteridaceae (Appendix E). The family, as construed here, contains five genera and approximately 36 species (three in Acystopteris, one in Cystoathyrium, ~25 in Cystopteris, seven in Gymnocarpium, and one in ×Cystocarpium), plus two named subspecies (one each in Cystopteris and Gymnocarpium), and eight named sterile hybrids (three in Cystopteris and five in Gymnocarpium). Each of these tallies is highly subjective--much further research, with an emphasis on cytological and low-copy nuclear data, is necessary before we can hope to have any confidence in the species limits and finer-scale evolutionary patterns in this family.