The Political Economy of Public Credit 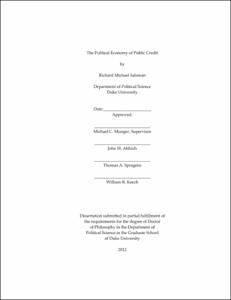 This dissertation critically examines predominant political-economic theories of public credit and public debt in light of the origins, development, and recent record expansion in such debt. Using a "history of thought" approach, I focus on those aspects of theory, from three main schools of thought - Classical, Keynesian, and Public Choice - which seek to explain the evolution of public debt, its political-economic causes and effects, the meaning of sustainability in public debt burdens, and the conditions under which governments are likely to monetize or repudiate their debts. For empirical context, I also provide three centuries of data on public debt for major nations, relative to their national income, and government bond-yield data for more recent decades.

There is value in classifying the major political economists who have examined public credit and public debt since 1700 as "pessimists," "optimists" or "realists."

Public debt pessimists argue that government provides no truly productive services, that its taxing and borrowing detract from the private economy, while unfairly burdening future generations, and that high and rising public leverage ratios are unsustainable and will likely cause national insolvency and long-term economic ruin. When public debts become excessive or un-payable, pessimists advise explicit default or deliberate repudiation. Public debt pessimists also believe financiers in general and public bondholders in particular are unproductive. Pessimists usually endorse smaller-sized governments and free markets. With few exceptions, most public debt pessimists appear in the Classical or Public Choice schools of thought. Among prominent public debt pessimists, the most representative are David Hume and Adam Smith.

Public debt optimists believe that government provides not only productive services, such as infrastructure and social insurance, but means to mitigate what they perceived to be "market failures," including savings gluts, economic depressions, inflation, and secular stagnation. Optimists contend that deficit-spending and public debt accumulation can stimulate or sustain economy activity and ensure full employment, without burdening present or future generation. To the extent public debts become excessive or un-payable, optimists tend to advise implicit default, by official and deliberate debasement of the national currency (inflation). As do pessimists, public debt optimists view financiers and bondholders as essentially unproductive. Optimists also defend a relatively larger economic role for the state. Almost without exception, optimists reside in the Keynesian school of political-economic thought. Among the leading optimists, the most representative are Alvin Hansen and Abba Lerner.

Public debt realists contend that government can and should provide certain productive services, mainly national defense, police protection, courts of justice, and basic infrastructure, but that social and redistributive schemes tend to undermine national prosperity. Realists say public debt should fund only services and projects that help a free economy maximize its potential, and that analysis must be contextualized - i.e., related to a nation's credit capacity, productivity, and taxable capacity. According to realists, public leverage is neither inevitably harmful, as pessimists say, nor infinite, as optimists say. Realists view financiers as productive and insist that sovereigns redeem their public debts in full, on time, and in sound money. Realists favor constitutionally-limited yet energetic governments that help promote robust markets. They appear mainly in the Classical era of political-economic thought. The most representative and renowned of the public debt realists are Sir James Steuart and Alexander Hamilton.

My main thesis is that public debt realists provide the most persuasive theories of public credit and public debt, and thus the most plausible interpretations of the long, fascinating history of public debt. Moreover, certain puzzles and paradoxes arising in contemporary public debt experience, among developed nations - including the recent, multi-decade trend of simultaneously rising public-leverage ratios and declining public debt yields - is explicable primarily in realist terms. In contrast, public debt pessimists and optimists alike offer unbalanced, inadequate accounts of public debt experience. Whereas pessimists are too often confused or mistaken in foreseeing an alleged "inevitable" ruin from public debt, optimists more often than not are confused and mistaken about the alleged "stimulus" attainable by large-scale deficit-spending and debt build-ups. Looking ahead, the realist perspective is likely to provide superior guideposts for maximally-accurate interpretations of public debt policies and trends.