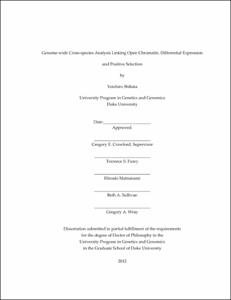 Deciphering the molecular mechanisms driving the phenotypic differences between humans and primates remains a daunting challenge. Mutations found in protein coding DNA alone has not been able to explain these phenotypic differences. The hypothesis that mutations in non-coding regulatory DNA are responsible for altered gene expression leading to these phenotypic changes has now been widely supported by differential gene expression experiments. Yet, comprehensive identification of all regulatory DNA elements across different species has not been performed. To identify the genetic source of regulatory change, genome-wide DNaseI hypersensitivity assays, marking all types of active gene regulatory element sites, were performed in human, chimpanzee, macaque, orangutan, and mouse. Many DNaseI hypersensitive (DHS) sites were conserved among all 5 species, but we also identified hundreds of novel human- and chimpanzee-specific DHS gains and losses that showed signatures of positive selection. Species-specific DHS gains were enriched in distal non-coding regions, associated with active histone modifications, and positively correlated with increased expression - indicating that these are likely to be functioning as enhancers. Comparison to mouse DHS data indicate that human or chimpanzee DHS gains are likely to have been a result of single events that occurred primarily on the human- or chimpanzee-specific branch, respectively. In contrast, DHS losses are associated with events that occurred on multiple branches. At least one mechanism contributing to DHS gains and losses are species-specific variants that lead to sequence changes at transcription factor binding motifs, affecting the binding of TFs such as AP1. These variants were functionally verified by DNase footprinting and ChIP-qPCR analyses.