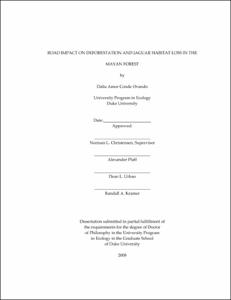 The construction of roads, either as an economic tool or as necessity for the implementation of other infrastructure projects is increasing in the tropical forest worldwide. However, roads are one of the main deforestation drivers in the tropics. In this study we analyzed the impact of road investments on both deforestation and jaguar habitat loss, in the Mayan Forest. As well we used these results to forecast the impact of two road investments planned in the region. Our results show that roads are the single deforestation driver in low developed areas, whether many other drivers play and important role in high developed areas. In the short term, the impact of a road in a low developed area is lower than in a road in a high developed area, which could be the result of the lag effect between road construction and forest colonization. This is consistent since roads resulted to be a significant deforestation driver for at least two decades. Roads significantly affect jaguar's habitat selection; however males showed a higher tolerance than females. From 1980 to 2000 female jaguars lost 36% of their habitat wile males lost 22%. Our forecasting of the impact of the proposed road, shows that it will promote the deforestation of approximately 16,851 has, and the jaguar habitat loss of 146,929, during the first decade; meanwhile the alternative route will have and impact of 2519 hectares and the habitat loss of 899 hectares.