Ideas, Power and Efficiency: the Transformation of Japanese Corporate Legislation, 1974-2006 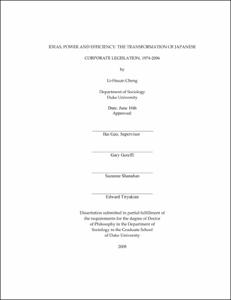 The purpose of this project is to explain the transformation of Japanese corporate law in the last three decades. The data is collected in the field study in Japan between May 2005 and June 2006. This project shows that the chaning dominant policy paradigm that defines the nature of a corporation and its relationship with the society in the policy field has indispensable impact on corporate legislation. Before the mid 1990s Japanese corporate legislation was dominated by bureaucrats in Ministry of Justice and the community of law scholars; they saw a corporation as a special association that has profound impacts on social order. The economic crisis in 1990 and the diffusion of the U.S. economic thinking among young generation of economic bureaucrats led to the regime shift of corporate legislation. After 1997, corporate legislation was dominated by economic bureaucrats who saw a corporation as a nexus of contracts whose only relationship with society is producing wealth. This shift significantly changed the course of corporate legislation. First, the paradigm shift brought different regulatory schemes for corporate finance. Before the mid 1997, corporate finance was seen as a source of turbulence and was strongly restrained. After the paradigm shift in 1997, corporate finance was perceived as a positive way to raise shareholder value by economic bureaucrats. Therefore, the course of legislation shifted to substantial deregulation. Second, the paradigm shift also brought significant change to the regulations for governance structure. Before 1997, a corporation was seen as an association composed of stable shareholders. Therefore, the solution to managerial misconducts was to strengthen internal democracy. After 1997 because the perception of a corporation had shifted to a nexus of contracts that are constantly negotiated in financial markets, the solutions to managerial misconducts were to strengthen board independence and information disclosure. Third, before 1997 corporate restructuring was seen as an important event that entails complicated procedural requirements to protect shareholders and creditors. After 1997 because corporate restructuring was treated as a tool to enhance economic efficiency by economic bureaucrats, a variety of restructuring schemes were deregulated.