Survey of the potential environmental and health impacts in the immediate aftermath of the coal ash spill in Kingston, Tennessee. 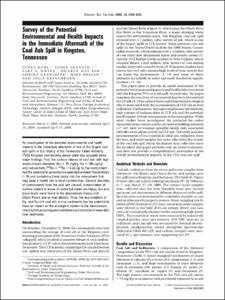 Sr. Research Scientist and Instructor in Earth and Ocean Sciences
Dwyer's experience lies in the development of tracers and indicators of environmental change, and their application to modern and ancient environmental systems. Research areas include paleoceanography, paleoclimatology, carbonate sedimentology, marine geology and environmental geochemistry. Nicholas Distinguished Professor of Environmental Quality
My research aims to link environmental geochemistry and isotope hydrology in order to trace the sources and mechanisms of water contamination and relationships with human health. Current research includes global changes of the chemical and isotopic compositions of water resources due to human intervention and contamination, salinization of water resources in the Middle East and Northern Africa, naturally occurring contaminants (arsenic, fluoride, boron) and radioactivity in water resources, the
Alphabetical list of authors with Scholars@Duke profiles.