The Role of Autophagy and Translation Initiation Factors in Overcoming Resistance to mTOR Inhibitors in Prostate Cancer. 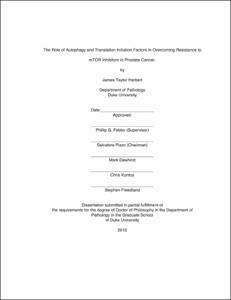 Castration resistant prostate cancer (CRPC) causes significant morbidity and mortality around the world and improving treatment options for patients with CRPC is a major concern for biomedical research. Because of the importance of activating mutations in the PI3K/AKT/mTOR pathway in prostate cancer, several mTOR inhibitors have been tested for efficacy in CRPC but despite promising preclinical findings, the results of clinical trials have been disappointing. The findings of several groups, including a clinical trial of RAD001 conducted at Duke, suggest that feedback upregulation of PI3K and autophagy may be potential mechanisms for resistance of CRPC to mTOR inhibitor therapy.

The main goal of this dissertation was to explore these mechanisms in vitro and to determine if combinations of PI3K inhibitors and different classes of mTOR inhibitors can overcome resistance to mTOR inhibitor monotherapy. In particular, we used immunoblotting, reverse phase protein microarrays, polysome profile analysis, cell cycle analysis, and several techniques for determining cell survival and proliferation to explore the differences in survival, proliferation, autophagy, and activity of the AKT, translation initiation, and autophagy cell signaling networks between prostate cancer cell lines treated with different combinations of mTOR and PI3K inhibitors. Our findings revealed that the combination of PI3K and mTOR inhibition leads to a synergistic inhibition of prostate cancer cell survival and cytostasis that is correlated decreased translation rates, hypophosphorylation of 4E-BP1, autophagy, and an uncoupling of normal signaling between AKT and mTOR. We were able produce an effect on cell survival similar to treatment with high doses of mTOR/PI3K inhibitor combinations by inhibiting cap-dependent translation using a non-phosphorylatable mutant of 4E-BP1. In contrast, knocking down two major autophagy genes had little to no effect on the survival of prostate cancer cells treated with PI3K/mTOR inhibitors but did protect from cell death caused by the UPR activator tunicamycin.

We conclude that treatment strategies that target PI3K, mTORC1 and mTORC2 simultaneously have the potential to be clinically useful in CRPC, probably due to the increased inhibition of eIF4E activity and cap-dependent translation when compared to monotherapy with allosteric mTORC1 inhibitors. Although autophagic cell death can be induced in prostate cancer cells, the autophagy observed after inhibition of PI3K and mTOR does not appear to contribute to cell death and is not a major resistance mechanism under these conditions. Nevertheless, we did observe different roles for autophagy in the survival of cells exposed to different types of stressors, and further elucidation of autophagy signaling networks may yet provide useful clinical targets.