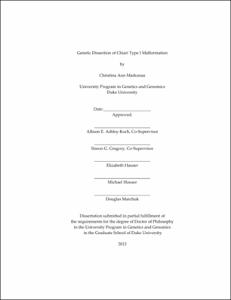 Chiari Type I Malformation (CMI) is a developmental disorder characterized by displacement of the cerebellar tonsils below the base of the skull, resulting in significant neurologic morbidity. While there are multiple proposed mechanisms for tonsillar herniation, "classical" CMI is thought to occur due to a compromised posterior cranial fossa (PF). As CMI patients display a high degree of clinical variability, it is hypothesized that this heterogeneous disorder has a complex etiology influenced by multiple genetic and environmental factors. Despite the fact that multiple lines of evidence support a genetic contribution to disease, no genes have been identified to date. Thus, the primary goal of this dissertation is to begin to dissect the genetic etiology of this important disorder and gain a better understanding of what factors contribute to the observed disease heterogeneity.

In order to address these goals, two studies and three distinct analytic approaches were carried out. In the first study, 367 individuals from 66 nonsyndromic, CMI multiplex families provided the basis for a whole genome linkage screen to identify genomic regions likely to harbor CMI susceptibility genes. Results from the linkage screen using the complete collection of families yielded limited evidence for linkage, likely due to genetic heterogeneity. Thus, two separate analytic approaches were applied to the data to reduce phenotypic and hopefully genetic heterogeneity, thereby increasing power to identify disease genes. In the first approach, families were stratified based on the presence or absence of connective tissue disorder (CTD) related conditions as hereditary CTDs are commonly associated with CMI and the presumed mechanism for tonsillar herniation differs between CMI patients with CTDs and "classical" CMI patients. Stratified analyses resulted in increased evidence for linkage to multiple genomic regions. Of particular interest were two regions located on chromosomes 8 and 12, both of which harbor growth differentiation factors, GDF6 and GDF3, which have been implicated in Klippel-Feil syndrome (KFS). In the second approach, a comprehensive evaluation of the genetic contribution to the PF was performed, followed by ordered subset analysis (OSA) using heritable, disease-relevant PF traits to identify increased evidence for linkage within subsets of families that were similar with respect to cranial base morphological traits. Much of the PF was found to be heritable and results from OSA identified multiple genomic regions showing increased evidence for linkage, including regions on chromosomes 1 and 22 which implicated several strong biological candidates for disease.

In the second study, 44 pediatric, surgical CMI patients were ascertained in order to establish disease subtypes using whole genome expression profiles generated from patient blood and dura mater samples and radiological data consisting of PF morphometrics. Sparse k-means clustering as well as a modified version were used to cluster patients using the biological and radiological data both separately and collectively. The most significant patient classes were identified from the pure biological clustering analyses. Further characterization of these classes implicated strong biological candidates involved in endochondral ossification from the dura analysis and a blood gene expression profile exhibiting a global down-regulation in protein synthesis and related pathways that may be associated with comorbid conditions.

Collectively, these studies established several strong biological disease candidates, as well as emphasized the need to better understand and account for disease heterogeneity, re-evaluate the current diagnostic criteria for CMI, and continue to investigate the use of endophenotypes, such as cranial base morphometrics, when conducting genetic studies.