Keeping in Touch: Relationships between Parenting Style, Parent-Child Electronic Communication, and the Developing Autonomy and Adjustment of College Students 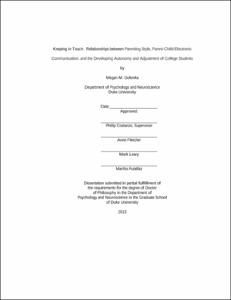 Traditionally seen as a time for increasing independence and autonomy, the college experience is often the first major, long-term physical separation from parents (Chickering, 1969; Chickering & Reisser, 1993). For previous generations, living away from home provided conditions for autonomy development partially based on infrequent contact with parents. In contrast, the rapid evolution of communication technology in the recent past allows today's generation of college students to connect to their parents instantly and frequently through a variety of electronic means including cellular phone calls, text messages, emails, video chats, and social media. The current study used self-report data from 180 residential college students at a mid-sized private institution in the southeastern United States to explore parent-child communication patterns as they relate to parenting styles and the development of emotional autonomy and adjustment to college. Emotional autonomy was measured with items from the Emotional Autonomy Scale (EAS; Steinberg & Silverberg, 1986). Following Beyers, Goossens, Van Calster, & Duriez (2005), a separation scale (derived from the EAS subscales of parental deidealization, nondependence on parents, and individuation) was used as a measure of emotional autonomy. Two scales from the Student Adaptation to College Questionnaire (Baker & Siryk, 1989) measured students' academic and social adjustment to college.

Results indicated that, in a given week, students reported an average contact frequency (with both parents combined) of 10.92 cell phone calls, 49.88 text messages, and 6.04 email exchanges. Contact was initiated by students and parents at roughly the same rates, and females had more contact with parents than males, in general. Facebook was more popular than Twitter and Instagram for connecting with parents through social media, and the majority of students felt either neutral or positive about being "Facebook friends" with their parents. Overall, students reported high satisfaction with both the frequency and the quality of communication with their parents. Greater levels of parental closeness significantly predicted higher satisfaction with the parent-child Facebook friendship.

The relationships between the traditional parenting styles of permissive, authoritative, and authoritarian parenting (Baumrind, 1991) were investigated in relation to communication patterns, autonomy, and adjustment. Helicopter parenting was also included as a predictor variable, though it is considered separate from the traditional parenting styles (Padilla-Walker & Nelson, 2012). Results of hierarchical regression analyses indicated that parents' higher scores on authoritarian parenting and helicopter parenting predicted more frequent cell phone contact with parents. Parental closeness also emerged as a significant, positive predictor of frequency of cell phone and total communication. Students who talked on their cell phones more frequently overall (not including parental contacts) tended to talk to their parents more often on the phone, and the same went for texting, as well.

Helicopter parenting also predicted lower emotional autonomy, which was in line with the only previous study of helicopter parenting in emerging adulthood (Padilla-Walker & Nelson, 2012). Surprisingly, authoritative and permissive parenting significantly predicted lower emotional autonomy, while authoritarian parenting was related to greater autonomy. Analyses investigating frequency of cell phone contact with parents as a moderator of this relationship indicated that more frequent phone conversations predicted decreased autonomy when parents were more authoritative. High levels of authoritarian parenting, on the other hand, resulted in higher levels of autonomy regardless of how often students talked on the phone with parents, while high contact with less authoritarian parents predicted decreased autonomy. Frequency of cell phone contact with parents was unrelated to academic and social adjustment to college. Findings are discussed in light of previous research and situated within a framework proposing that technological advances in communication have contributed to lengthening the path to adulthood.