Cloning of the cDNA for the human beta 1-adrenergic receptor. 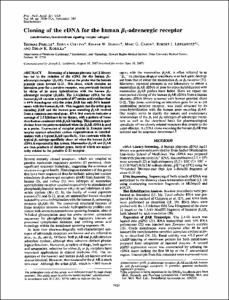 View / Download
1.4 Mb
Date
Authors
Frielle, T
Collins, S
Daniel, KW
Caron, MG
Lefkowitz, RJ
Kobilka, BK
Repository Usage Stats
194
views
202
downloads
Abstract
Screening of a human placenta lambda gt11 library has led to the isolation of the cDNA for the human beta 1-adrenergic receptor (beta 1AR). Used as the probe was the human genomic clone termed G-21. This clone, which contains an intronless gene for a putative receptor, was previously isolated by virtue of its cross hybridization with the human beta 2-adrenergic receptor (beta 2AR). The 2.4-kilobase cDNA for the human beta 1AR encodes a protein of 477 amino acid residues that is 69% homologous with the avian beta AR but only 54% homologous with the human beta 2AR. This suggests that the avian gene encoding beta AR and the human gene encoding beta 1AR evolved from a common ancestral gene. RNA blot analysis indicates a message of 2.5 kilobases in rat tissues, with a pattern of tissue distribution consistent with beta 1AR binding. This pattern is quite distinct from the pattern obtained when the beta 2AR cDNA is used as a probe. Expression of receptor protein in Xenopus laevis oocytes conveys adenylate cyclase responsiveness to catecholamines with a typical beta 1AR specificity. This contrasts with the typical beta 2 subtype specificity observed when the human beta 2AR cDNA is expressed in this system. Mammalian beta 1AR and beta 2AR are thus products of distinct genes, both of which are apparently related to the putative G-21 receptor.
Type
Journal article
Subject
Amino Acid Sequence
Animals
Base Sequence
DNA
DNA, Recombinant
Humans
Molecular Sequence Data
Receptors, Adrenergic, beta
Sequence Homology, Nucleic Acid
Turkeys
Permalink
https://hdl.handle.net/10161/7875
Collections
More Info
Show full item record Adjunct Associate Professor in Psychiatry and Behavioral Sciences
Research Focus One only has to open the newspaper or turn on the radio to hear about the epidemic of obesity in America. Not only does obesity exact a heavy toll on the population's health, but the medical costs associated with obesity, especially those related to treatment for type 2 diabetes and cardiovascular disease, are astronomical. Our laboratory is interested in the biochemical mechanisms that regulate body weight. Until the mid-1990s, adipose tissue had been largely c