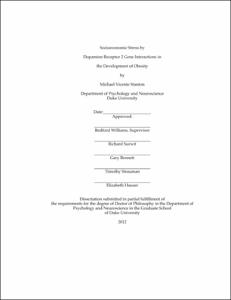 Background: Previous research suggests that early life socioeconomic stress and certain genetic polymorphisms may be partly associated with increased adiposity; however, research on both genetic and environmental predictors fail to account for the dramatic increase in obesity over that last several decades. Hypothesis: It was hypothesized that a GxE interaction between DRD2-related SNPs and parental education would predict trunk and total fat mass. This same interaction would also predict total calories from a 24-hour diet recall, which would mediate its effect on trunk and total fat mass. Sample: The current study analyzed genetic and psychosocial data from 697 participants collected for the Family Heart Study, an investigation examining the relationship between psychosocial behaviors and cardiovascular risk factors. Methods: Interactions were assessed between four single nucleotide polymorphisms (SNPs) in the D2 receptor and ANKK1 genes and tertiles of parental education predicting DXA-scan-measured trunk and total body fat mass. A measure of total calories, as assessed by a 24-hour diet recall, was tested as a mediator of this effect. Results: An interaction between mother's education and RS1116313 SNP predicted trunk fat (F(4,191)=2.94, p=0.022) and total body fat (F(4, 191)=3.94, p=0.004). The effects were driven by a reduction in trunk and total fat mass among C/C or T/T homozygotes with a high mother's education, which was not observed among C/T heterozygotes. Father's education was neither an interactive nor a main effect predictor in any models. Interactions predicting total calories were also non-significant, and no support for mediation was found. Post-hoc analyses revealed that leisure activity was also not a mediator. Alternatively, certain dietary components were predicted by the interactions between mother's education and RS1124492 and between mother's education and RS1800498. Conclusions: Trunk and total body fat composition are predicted by an interaction between mother's education and the RS1116313 SNP. This effect does not appear to be mediated by total calories or leisure activity. Other SNPs associated with the D2 receptor interact with mother's education to predict dietary components.