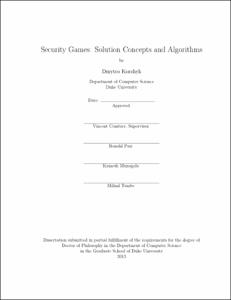 Algorithms for finding game-theoretic solutions are now used in several real-world security applications. Many of these applications are based on different but related game-theoretical models collectively known as security games. Much of the research in this area has focused on the two-player setting in which the first player (leader, defender) commits to a strategy, after which the second player (follower, attacker) observes that strategy and responds to it. This is commonly known as the Stackelberg, or leader-follower, model. If none of the players can observe the actions of the others then such a setting is called a simultaneous-move game. A common solution concept in simultaneous-move games is the Nash equilibrium (NE). In the present dissertation, we contribute to this line of research in two ways.

First, we consider new ways of modeling commitment. We propose the new model in which the leader can commit to a correlated strategy. We show that this model is equivalent to the Stackelberg model in two-player games and is different from the existing models in games with three or more players. We propose an algorithm for computing a solution to this model in polynomial time. We also consider a leader-follower setting in which the players are uncertain about whether the follower can observe. We describe an iterative algorithm for solving such games.