Targeting the Intrinsic Pathway of Coagulation with RNA Aptamers 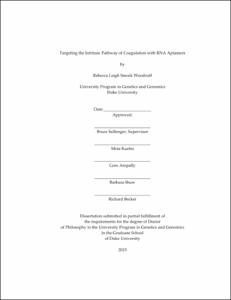 Thrombosis is associated with the occlusion of a blood vessel and can be triggered by a number of types of injury, such as the rupture of an atherosclerotic plaque on the artery wall, changes in blood composition, or blood stasis. The resulting thrombosis can cause major diseases such as myocardial infarction, stroke, and venous thromboembolic disorders that, collectively, account for the most common cause of death in the developed world. Anticoagulants are used to treat and prevent these thrombotic diseases in a number of clinical and surgical settings. Although commonly prescribed, currently approved anticoagulants have a major limitation of severe drug-induced bleeding that contributes to the high levels of morbidity and mortality associated with use. The "holy grail" for antithrombotic therapy is to identify a drug that inhibits thrombus formation without promoting bleeding. Understanding the differences between thrombosis and hemostasis in the vascular system is critical to developing these safe and effective anticoagulants, as this depends on striking the correct balance between inhibiting thrombus formation (efficacy) and reducing the risk of severe bleeding (safety). While it is commonly thought that the same factors play a similar role in hemostasis and thrombosis, recent evidence points to differing functions for FXI and FXII in each of these settings. Importantly, these factors seem to contribute to pathological thrombus formation without being involved in normal hemostasis.

The overall goal of this project was to evaluate the inhibition of the intrinsic pathway of coagulation as a potential anticoagulant strategy utilizing the aptamer platform. Aptamers are short, highly structured nucleic acids that act as antagonists by binding to large surface areas on their target protein and thus tend to inhibit protein-protein interactions. High affinity binding aptamers have been isolated that specifically target a diverse range of proteins, including transcription factors, proteases, viral proteins, and growth factors, as well as other coagulation factors. As synthetic molecules, aptamers have a small molecular weight, are highly amenable to modifications that can control their bioavailability, and have not been found to elicit an immune response, thus making them ideal drug candidates. Importantly, aptamers can be rapidly and effectively reversed with either a sequence specific antidote that recognizes the primary sequence of the aptamer or a universal antidote that binds to their backbone and reverses all aptamer activity independent of sequence. This ability lends itself well to their therapeutic application in coagulation, as rapid reversal of a drug upon the onset of bleeding is a key property for increasing the safety of this class of drugs.

Aptamers targeting FXI/FXIa and FXII/FXIIa were isolated in two separate SELEX (systematic evolution of ligands by exponential enrichment) procedures: the FXII aptamer was isolated in a convergent SELEX approach and the FXIa aptamer was isolated from a purified protein selection. In both processes, 2'fluoropyrimindine modified RNA with a 40-nucleotide random region was incubated with either the plasma proteome (in initial rounds of the convergent SELEX) or the purified protein target (FXII or FXIa). The nucleic acids that did not bind to the target were separated from those that bound, and these molecules were then amplified to generate an enriched pool with increased binding affinity for the target. This process was repeated under increasingly stringent conditions to isolate the aptamer that bound with the highest affinity to the purified target protein. Utilizing biochemical and in vitro coagulation assays, specific, high-affinity binding and functional anticoagulant aptamers were identified for both protein targets, and the mechanism of anticoagulation was ascertained for each aptamer.

Overall, both aptamers bound to an exosite on their target protein that was able to inhibit downstream activation of the next protein in the coagulation cascade. In order to specifically examine aptamer effects on several parameters of thrombin generation, a new assay was developed and fully characterized using aptamer anticoagulants targeting other coagulation factors. Aptamer inhibition of both FXI and FXII was able to decrease thrombin generation in human plasma. However, limited cross-reactivity in other animal species by both aptamers hindered our ability to assess aptamer inhibition in an in vivo setting. Moving forward, screening aptamers against a larger selection of animal plasmas will hopefully allow us to identify an animal species in which we can analyze aptamer inhibition of the intrinsic pathway for effectiveness and safety in inhibiting thrombosis. The further characterization and use of these aptamers in plasma and blood based settings will allow us to study the diverging functions of the intrinsic pathway in thrombosis and hemostasis.

A critical need exists for safe and effective anticoagulants to treat and prevent numerous thrombotic procedures and diseases. An ideal anticoagulant is one that strikes the correct balance between inhibiting thrombus formation and reducing drug-induced bleeding. Inhibition or depletion of factors XI and XII of the intrinsic pathway of coagulation have shown reduced thrombus formation without interruption of normal hemostasis in several models of thrombosis. By developing novel RNA aptamer anticoagulants to these factors, we have set the stage for evaluating the net therapeutic benefit of intrinsic pathway inhibition to effectively control coagulation, manage thrombosis, and improve patient outcome. As well as developing a safe anticoagulation, these agents can lead to important biological discoveries concerning the fundamental difference between hemostasis and thrombosis.