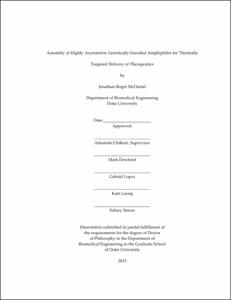 Traditional small molecule chemotherapeutics show limited effectiveness in the clinic as their poor pharmacokinetics lead to rapid clearance from circulation and their exposure to off-target tissues results in dose-limiting toxicity. The objective of this dissertation is to exploit a class of recombinant chimeric polypeptides (CPs) to actively target drugs to tumors as conjugation to macromolecular carriers has demonstrated improved efficacy by increasing plasma retention time, reducing uptake by healthy tissues, and enhancing tumor accumulation by exploiting the leaky vasculature and impaired lymphatic drainage characteristic of solid tumors. CPs consist of two principal components: (1) a thermally responsive elastin-like polypeptide (ELP) that displays a soluble-to-aggregate phase transition above a characteristic transition temperature (Tt); and (2) a cysteine-rich peptide fused to one end of the ELP to which small molecule therapeutics can be covalently attached (the conjugation domain). This work describes the development of CP drug-loaded nanoparticles that can be targeted to solid tumors by the external application of mild regional hyperthermia (39-43°C).

Highly repetitive ELP polymers were assembled by Plasmid Reconstruction Recursive Directional Ligation (PRe-RDL), in which two halves of a parent plasmid, each containing a copy of an oligomer, were ligated together to dimerize the oligomer and reconstitute the functional plasmid. Chimeric polypeptides were constructed by fusing the ELP sequence to a (CGG)8 conjugation domain, expressed in Escherichia coli, and loaded with small molecule hydrophobes through site specific attachment to the conjugation domain. Drug attachment induced the assembly of nanoparticles that retained the thermal responsiveness of the parent ELP in that they experienced a phase transition from soluble nanoparticles to an aggregated phase above their Tt. Importantly, the Tt of these nanoparticles was near-independent of the CP concentration and the structure of the conjugated molecule as long as it displayed an octanol-water distribution coefficient (LogD) > 1.5.

A series of CP nanoparticles with varying ratios of alanine and valine in the guest residue position was used to develop a quantitative model that described the CP transition temperature in terms of three variables - sequence, chain length, and concentration - and the model was used to identify CPs of varying molecular weights that displayed transition temperatures between 39°C and 43°C. A murine dorsal skin fold window chamber model using a human tumor xenograft was used to validate that only the thermoresponsive CP nanoparticles (and not the controls) exhibited a micelle-to-aggregate phase transition between 39-43°C in vivo. Furthermore, quantitative analysis of the biodistribution profile demonstrated that accumulation of these thermoresponsive CP nanoparticles was significantly enhanced by applying heat in a cyclical manner. It is hoped that this work will provide a helpful resource for the use of thermoresponsive CP nanoparticles in a variety of biomedical applications.