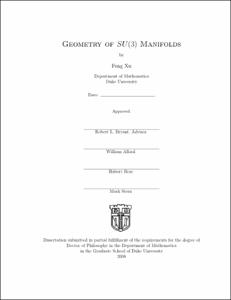 I study differential geometry of 6-manifolds endowed with various $SU(3)$ structures from three perspectives. The first is special Lagrangian geometry; The second is pseudo-Hermitian-Yang-Mills connections or more generally, $\omega$-anti-self dual instantons; The third is pseudo-holomorphic curves.