A network of substrates of the E3 ubiquitin ligases MDM2 and HUWE1 control apoptosis independently of p53. 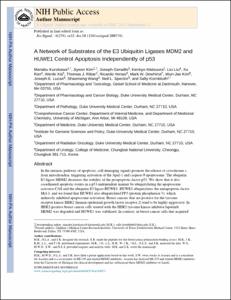 Gustavo S. Montana Distinguished Professor Emeritus of Radiation Oncology
Mark W. Dewhirst, DVM, PhD is the Gustavo S. Montana Professor of Radiation Oncology and Vice Director for Basic Science in the Duke Cancer Institute. Dr. Dewhirst has research interests in tumor hypoxia, angiogenesis, hyperthermia and drug transport. He has spent 30 years studying causes of tumor hypoxia and the use of hyperthermia to treat cancer. In collaboration with Professor David Needham in the Pratt School of Engineering, he has developed a novel thermally sensitive drug carrying liposom Associate Research Professor in the Social Science Research Institute
This author no longer has a Scholars@Duke profile, so the information shown here reflects their Duke status at the time this item was deposited.