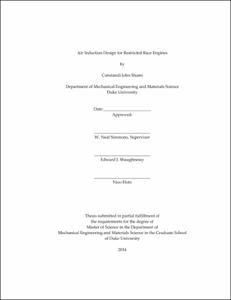 The air induction system is one of the most influential subsystems within the vehicle powertrain for both fuel efficiency and power generation, especially in restricted race engine applications. The primary focus of this investigation is to parameterize the air induction system into three components, namely the diffuser, plenum, and runners, and to determine the internal geometric parameters most dominant for power generation with the goal of designing an air induction system to generate maximum performance for a given restricted internal combustion engine. This was accomplished through theoretical calculations; engine simulation and modeling using GT-Power; computational fluid dynamics modeling using SolidWorks Flow Simulation; and finally building a prototype of the final configuration for experimentation on an engine dynamometer. It was determined through these simulations that a symmetric air induction design featuring a 6.0° diffuser angle, 0.54L plenum volume, and 5" runner lengths proved to sustain an evenly distributed 19% greater mass flow rate than the previous design, generating a 4.8% increase in power output and sustaining 95% of peak torque output for 1000RPM longer than the previous design. Experimentally, the dynamometer test sessions with normalized results for power and torque generation versus engine speed validated the trends predicted by the engine simulation and CFD analysis for an overall holistic investigation into air induction system design.