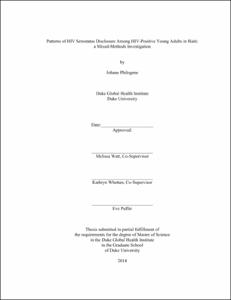 <bold>Background</bold>: By facilitating access to prevention and care services, HIV serostatus disclosure has been associated with improved physical health, psychological well-being, and improved health behaviors for people living with HIV/AIDS (PLWHA). Disclosure to sexual partners, in particular, can help prevent the forward transmission of HIV. Disclosure can increase social support but can also lead to negative social outcomes including stigma and discrimination. Thus, disclosing HIV status to friends, family, and sexual partners is a complex psychosocial challenge that PLWHA face, particularly adolescents and youth who have an increased lifespan due to current effective treatment protocols.

<bold>Objectives</bold>: This study had three objectives: 1) to determine gender-related differences in the rate and patterns of HIV serostatus disclosure to family, friends and sexual partners among HIV-positive youth in Haiti; 2) to identify gender-specific relational and psychosocial predictors of HIV disclosure to sexual partner; and 3) to qualitatively explore and describe motivations and experiences related to HIV disclosure in this population.

<bold>Methods</bold>: A cross-sectional study was conducted in a random sample of 680 sexually active HIV-positive young adults (18-29 years) from six clinics in Port-au-Prince, Haiti. Socio-demographic, health, sexual and reproductive history, sexual behavior, psychosocial and disclosure data were collected using a pre-tested interviewer-administered structured questionnaire. Rates and patterns of HIV serostatus were described, and factors associated with disclosure to all sexual partners in the past 3 months were analyzed using hierarchical logistic regression models, separately by gender. Qualitative data was collected through individual in-depth interviews with a purposefully selected sample of 12 young adult participants to explore whom they chose to disclose to, how they disclosed to these individuals, and how these individuals reacted. Content analysis allowed for the description of motivations and experiences related to HIV disclosure in this population.

<bold>Results</bold>: Slightly over half (56%) of participants had told at least one person about their HIV status. Female respondents were more likely than male respondents to have disclosed to family or friends. Male youth were more likely to disclose their status for the first time to sexual partners (35%), while female youth were more likely to choose their mother as their first confidant (51%). Overall, 33% of participants reported having disclosed their HIV status to all their sexual partners from the last 3 months, with no significant difference across genders. For both genders, older age and being unaware of partners' HIV status were significantly associated with lower odds of HIV serostatus disclosure. Additionally for young males, disclosure stigma was negatively associated with disclosure while HIV acceptance and personalized stigma were significant predictors of disclosure. Female youth who were single, had casual or multiple partners, and experienced greater personalized stigma were less likely to disclose, whereas the availability of social support was positively associated with disclosure to all sexual partners. While disclosure to sexual partners was motivated primarily by a desire to encourage partners to test for HIV and increase condom use, or by a sense of moral responsibility, important contextual differences emerged in qualitative analysis with regards to barriers to disclosure, particularly fear of stigma and fear of partner's reaction.