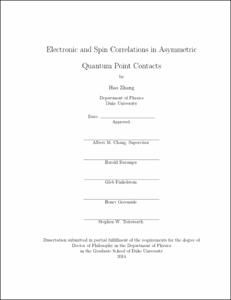 A quantum point contact (QPC) is a quasi-one dimensional electron system, for which the conductance is quantized in unit of $2e^2/h$. This conductance quantization can be explained in a simple single particle picture, where the electron density of states cancels the electron velocity to a constant. However, two significant features in QPCs were discovered in the past two decades, which have drawn much attention: the 0.7 effect in the linear conductance and zero-bias-anomaly (ZBA) in the differential conductance. Neither of them can be explained by single particle pictures.

In this thesis, I will present several electron correlation effects discovered in asymmetric QPCs, as shown below:

The differential conductance for long channel QPCs shows the zero-bias-anomaly for every other linear conductance resonance valley, suggesting a near even-odd behavior. This even-odd law can be interpreted within the electron-correlation-induced barrier picture, where the quasi-localized non-zero spin in the quasi-bound state (Kondo-like) couples to the Fermi sea in the lead. For a specific case, triple-peak structure is observed in the differential conductance curves, while the electron filling number is still even, suggesting a spin triplet formation at zero magnetic field.