Border Images and Imaginaries: Spectral Aesthetics and Visual Medias of Americanity at the U.S.-Mexico Border 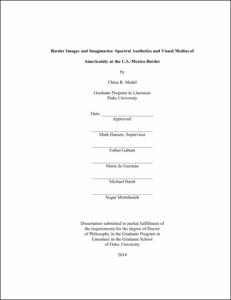 Border Images and Imaginaries: Spectral Aesthetics and Visual Media of Americanity at the U.S.-Mexico Border, proposes an emerging aesthetic of spectrality in visual media about the U.S.-Mexico border that challenges the power of militarized and racialized visibility. The visual media projects I work with, including cinema, electronic performance art, site specific video installation, and photography generate an aesthetic of spectrality as they try to conjure and express the socially invisible through sensual elements like affect, sound, kinaesthetics, and full embodiment. This aesthetic elicits the perceptions of our other senses beyond only the visual and makes visible the social flesh of the movements and socialities of migration rather than racialized, migrant bodies. The border, I claim, is an important site for understanding the continued deployment of visibility in the neoliberal legacies of what Quijano and Wallerstein call, Americanity, a term denoting the development of the modern capitalist system in the Americas which relied upon the imbricate logics of colonialism, racism, and the deification the modern. Images of spectrality are intermediaries between what Diana Taylor calls, archive and repertoire, being both documents and sites of embodied engagement that produce both certain and uncertain knowledges of race and migration at the border. The visual media projects in my dissertation cultivate spectral aesthetics to theorize an alternative visibility and the changing production of public memory. By making visible the social flesh of heterogeneous encounters with media, spectral aesthetics reforms collective memory making it a process of democratic editorialization that privileges experience as the site of a multivocal history. This project reclaims the image as a terrain for the multitude's inquiry and imagination about the US-Mexico border, and puts the imaginaries generated by these images in dialog with activist projects happening in relation to immigration.