How Ideology Became Policy: The U.S. War in Iraq and the Role of Neo-conservatism 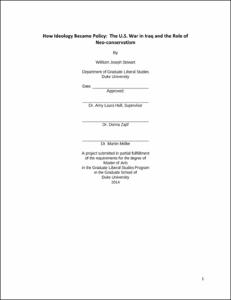 View / Download
290.4 Kb
Date
Author
Stewart, William J.
Advisor
Hall, Amy Laura
Repository Usage Stats
1,568
views
6,363
downloads
Abstract
This paper explores how neoconservative ideology informed the Bush Administration’s interpretation/use of intelligence, leading to the decision to invade Iraq. The Administration based its decision to invade Iraq upon four neoconservative assumptions. The first assumption was that Saddam Hussein’s regime was on the verge of acquiring nuclear weapons and had already amassed stockpiles of chemical and biological weapons. The second assumption was that the regime had meaningful links with Al Qaeda and had something to do with 9/11. The third assumption was that, within Iraq, the regime’s fall would be followed by rapid and peaceful democratization. The fourth assumption was that a similar democratic transformation would be precipitated elsewhere in the region. This paper examines primary source documents authored by key members of the Bush Administration (President Bush, VP Cheney, Secretary Powell and Secretary Rice). These accounts are compared to other relevant primary source documents such as the “9/11 Commission Report” and the “National Intelligence Estimate.” In addition, the preexisting 9/11 ideology held by top officials in the Bush Administration that shaped the decision to invade Iraq is examined.
Type
Master's thesis
Department
Graduate Liberal Studies
Permalink
https://hdl.handle.net/10161/9249
Citation
Stewart, William J. (2014). How Ideology Became Policy: The U.S. War in Iraq and the Role of Neo-conservatism. Master's thesis, Duke University. Retrieved from https://hdl.handle.net/10161/9249.
Collections
More Info
Show full item record