Evolution of networks and sequences in eukaryotic cell cycle control. 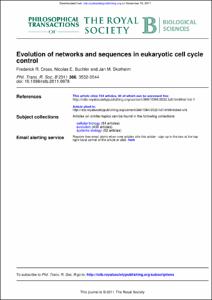 Assistant Professor of Biology
Our lab is interested in the systems biology and evolution of epigenetic switches (bistability) and clocks (oscillators) in gene regulatory networks, two functions that are essential for patterning, cell proliferation, and differentiation in biological systems. We also study biochemical oscillators such as the cell cycle, metabolic rhythms, and circadian clocks, which co-exist in the same cells and interact with one another through shared resources.