Fermion Bags and A New Origin for a Fermion Mass 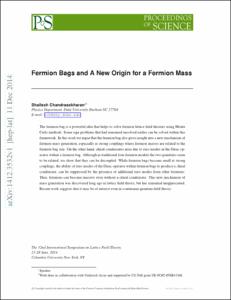 View / Download
293.9 Kb
Author
Chandrasekharan, S
Repository Usage Stats
168
views
111
downloads
Abstract
The fermion bag is a powerful idea that helps to solve fermion lattice field theories using Monte Carlo methods. Some sign problems that had remained unsolved earlier can be solved within this framework. In this work we argue that the fermion bag also gives insight into a new mechanism of fermion mass generation, especially at strong couplings where fermion masses are related to the fermion bag size. On the other hand, chiral condensates arise due to zero modes in the Dirac operator within a fermion bag. Although in traditional four-fermion models the two quantities seem to be related, we show that they can be decoupled. While fermion bags become small at strong couplings, the ability of zero modes of the Dirac operator within fermion bags to produce a chiral condensate, can be suppressed by the presence of additional zero modes from other fermions. Thus, fermions can become massive even without a chiral condensate. This new mechanism of mass generation was discovered long ago in lattice field theory, but has remained unappreciated. Recent work suggests that it may be of interest even in continuum quantum field theory.
Type
Journal article
Subject
hep-lat
hep-lat
Permalink
https://hdl.handle.net/10161/9567
Collections
More Info
Show full item record Professor of Physics
Prof. Chandrasekharan is interested in understanding quantum field theories non-perturbatively from first principles calculations. His research focuses on lattice formulations of these theories with emphasis on strongly correlated fermionic systems of interest in condensed matter, particle and nuclear physics. He develops novel Monte-Carlo algorithms to study these problems. He is particularly excited about solutions to the notoriously difficult <a href="http://en.wikipedia.org/wiki/Numerical_si