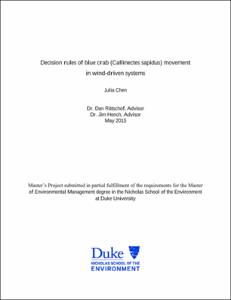 View / Download
1.7 Mb
Date
Author
Chen, Julia
Advisors
Rittschof, Daniel
Hench, James
Repository Usage Stats
254
views
215
downloads
Abstract
Blue crabs (Callinectes sapidus) are the most economically valuable fishery in North Carolina, and the commercial harvest is mainly from the Albemarle-Pamlico Estuarine System (APES). Because of small inlets which restrict ocean tidal forcing in addition to large expanses of shallow water, circulation in the APES is primarily wind-driven. While much is known about how crabs move in tidally-dominated systems where movements are based upon selective tidal-stream transport, crab movements in wind-driven systems, and their response to environmental factors, remain poorly understood. This study aims to increase understanding of environmental controls on blue crab movements in order to inform management of crab resources in wind-driven systems. We studied crab movements in Lake Mattamuskeet National Wildlife Refuge, a 40,000-acre shallow, wind-driven system within the APES. During October 2014, free ranging crabs were tracked using radio frequency identification (RFID) tags and an antenna array deployed along the Central Canal connecting the lake to Pamlico Sound. Colocated and simultaneous meteorological and physical oceanographic data were collected to understand environmental drivers that may affect crab movements. Analyses of these data indicate: 1) a significant net export of blue crabs from the lake to the sound; the drivers of that export remain unclear; 2) crab movements coincided with the direction of water flow in the canal, and 3) at small-scales, crabs were able to move against the water flow. These results suggest that there is a fall migration, during which crabs move from the lake to the sound, and at a relatively constant rate that is slower than the mean water flow. If crabs are to move out of the lake at this time it is essential to open water control structures in order to facilitate migration. This is particularly important for the females, who because of their large size may contribute disproportionately large amounts of larvae to the Pamlico Sound broodstock. Crabs in the larger fishery may also move toward higher salinity water if they behave similarly to those studied here.
Type
Master's project
Department
Nicholas School of the Environment and Earth Sciences
Subject
movement
estuary
Lake Mattamuskeet
Pamlico Sound
Blue crab
wind
Permalink
https://hdl.handle.net/10161/9693
Citation
Chen, Julia (2015). Decision rules of blue crab (Callinectes sapidus) movement in wind-driven systems. Master's project, Duke University. Retrieved from https://hdl.handle.net/10161/9693.
Collections
More Info
Show full item record