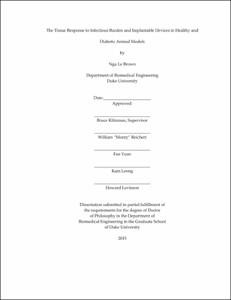 Performance of biomedical implants has been hindered by fibrosis, infection, and deficient tissue integration due in part to the body's foreign body response. In addition, diabetes mellitus is affecting a greater number of people worldwide and in the United States. As the percentage of the population affected by diabetes increases, a larger fraction of these implanted devices will be placed in diabetic patients. Unfortunately, diabetes is often complicated by poor wound healing and a greater risk of infection, issues that could adversely affect proper acceptance of an implant. Diabetic animal models are useful in studying the response to infection as well as the tissue response to an implanted device. Therapies such as nitric oxide release have been applied to indwelling devices to mediate the foreign body response and improve the wound healing response around implants. Particularly relevant to diabetic patients are implantable glucose sensors, and so determining the diabetic tissue response to these devices is crucial to improving their lifetime and performance.

A novel outcome-based streptozotocin dosing regimen was developed to induce Type 1 diabetes in a rodent model. Male CD (Sprague-Dawley type) rats weighing 150-200 g were given three consecutive daily doses of 40 mg/kg streptozotocin (STZ) on Days 1, 2, and 3. On Day 5, tail vein blood glucose was checked. If blood glucose was not within the target diabetic range of 350-600 mg/dl, rats received an additional dose of STZ. This procedure was repeated every 48 hours until all rats achieved target hyperglycemia. Control rats were given similar doses of vehicle (saline/citrate), which had no effect on blood glucose. After the last injection of streptozotocin, two weeks were allowed to ensure the full effects of the diabetic state would be present at device implantation. Blood glucose was measured every 2 days for diabetics and 4 days for controls for the duration of the experiment. The developed diabetic model resulted in a stable hyperglycemia for the duration of the experiment (in some cases, up to 2 months). Animals also exhibited typical symptoms of diabetes, such as minimal changes in weight, excessive thirst, and polyuria.

Infection response in the presence of implanted devices was investigated in healthy and diabetic animal models. In the healthy animal model, control stainless steel compression plates and plates coated with a nitric-oxide releasing xerogel (20% AHAP) were attached to the femurs of 12 adult rabbits. Both femurs were inoculated with 3x106 CFU MSSA (methicillin-sensitive Staph aureus) for a period of 20 minutes before the surgical sites were sutured. After 7 days, the wound, device, and a portion of bone were cultured. A muscle biopsy was removed and homogenized to quantify bacterial infection. Since the microbiologic data were not normally distributed, they were compared using an unpaired Wilcoxon Rank Sum Test. No significant differences in bacterial burden were observed between the control and NO-eluting devices, however the study did find a high correlation of temperature of the adjacent muscle at implantation with the ensuing bacterial content. In the diabetic animal model, a novel dosing regimen of streptozotocin based on a target blood glucose of 350-600 mg/dl was used to induce type-1 diabetes. Stable hyperglycemia was maintained for 21 days. Two weeks after achieving the target hyperglycemia, stainless steel fracture plates were secured to each femur with stainless steel screws approximately 3 mm in length. The implant site on the right side of the animal was inoculated with 3 x 107 CFU of methicillin-sensitive S. aureus while the left side served as a control. After seven days, quantitative bacterial count was performed at explantation and no cross-over of bacteria was detected from the inoculated side to the non-inoculated side. Infection after S aureus inoculation in the presence of an implanted device was significantly higher in diabetic animals when compared to that of control animals (p = 0.0003, Wilcoxin Rank-Sum Test) supporting the hypothesis that diabetes adversely affects the ability to fight infection in the presence of an indwelling device in an animal model. There was not a significant difference detected in the infectious burden for the non-inoculated limb (left) between the diabetic and non-diabetic groups when compared using a Wilcoxon Rank-Sum Test (p = 0.0682), however this near-significance suggests that even in the absence of an introduced inoculum, diabetes increases infection susceptibility in the presence of an implant.

Nitric oxide (NO) release can be used to mediate the foreign body response around implanted devices. NO also has antibacterial properties that may enhance the body's immune response to implant-associated infection. Additionally, diabetic wounds are characterized by nitric oxide deficiency, and thus NO supplementation may promote better wound healing and implant acceptance in diabetics. The use of nitric oxide to modulate the tissue response to indwelling implants was explored in two studies. In vivo glucose recovery of subcutaneously implanted NO-releasing microdialysis probes was evaluated in a healthy rat model using saturated NO solutions that provided a steady release of NO. A constant NO flux of 162 pmol cm-2 s-1 was perfused through the probe membrane for 8 hours daily. The in vivo effects of increased localized NO were evaluated by monitoring glucose recovery over a 14-day period. Beginning at 7 days, significant differences in glucose recovery between the control and NO-releasing probes were observed. At the 14-day time point, histological analysis revealed decreased inflammatory cell density at the probe surface and a thinner collagen capsule. In the second study, polyurethane-coated wires with varying NO release properties were implanted subcutaneously in 17 Yorkshire piglets with time points of 3, 7, 21, and 42 days. To create the NO-releasing coating, the NO-releasing vehicle (i.e., PROLI/NO, AEAP3 or MPTMS nanoparticles) was dispersed into EtOH (2.5 mL) at concentrations of 36 or 72 mg/mL. This solution was then mixed with an equal volume of 50:50 wt% HPU/TPU (160 mg/mL total PU). Effects of NO release were analyzed using histological data. These data were analyzed using a non-parametric Wilcoxon rank-sum test. Coatings with short NO release durations (i.e., 24 h) failed to reduce collagen capsule thickness at 3 and 6 weeks. Longer release durations (3 and 14d) however significantly reduced collagen capsule thickness at longer timepoints. The acute inflammatory response was significantly affected by coatings with the longest duration and greatest dose of NO release. However these benefits were not realized at later timepoints, suggesting that NO must be actively released in order to influence inflammatory response.

The tissue response to percutaneously implanted glucose sensors was investigated in healthy and diabetic rats. A multi-dose regimen of streptozotocin was used to induce diabetes in experimental rats. Three types of functional, implantable glucose sensors, supplied by Medtronic® were used: SofTM sensor, EnliteTM sensor, and Enlite 2TM sensor. The sensors were percutaneously implanted in the rat dorsum subcutaneous space. MiniLinkTM transmitters were attached to the rats, permitting continuous glucose monitoring. At 3 days, 1 week, and 4 weeks, tissue directly adjacent to the sensors was evaluated for collagen encapsulation, density of any collagen encapsulation, inflammatory response as measured via inflammatory cell density, and microvessel density. These endpoints were evaluated histologically via Masson's trichrome, Hoechst, H&E, and CD31 staining. Additionally, continuous functional sensor data was evaluated for sensor accuracy, attenuation, and lag time. Histological analyses revealed few significant differences in collagen thickness among different sensors, in different tissue types, or over time. In general, Masson's trichrome-stained images seem to suggest a balance between collagen capsule formation and inflammatory cell density. As inflammation increased adjacent to sensors over time, collagen capsule thickness decreased somewhat and stabilized. Collagen capsule formation was most evident adjacent to the plastic tubing portion of the sensor whereas inflammation was greatest adjacent to the sensing electrode. Likewise, few significant differences in collagen density index (CDI) were observed among sensor types, tissue types, or over time. CDI remained relatively constant over time for all sensors. Analysis of inflammatory cell density in general revealed a greater inflammatory response adjacent to percutaneous Enlite sensors, though these results were not significant. Additionally, inflammatory cell density was generally greater adjacent to non-diabetic sensors, however this result was also not significant. Inflammatory cell density increased or remained stable over time for all sensor types, suggesting that the presence of percutaneously-implanted sensors produces a chronic inflammatory response that does not resolve. Vascularity adjacent to implanted sensors remained generally stable over time, sometimes decreasing but not significantly. At the 1-month timepoint, no significant differences in vasculature were seen among sensor types. A balance also appears to exist for microvessel and inflammatory cell densities. The non-diabetic percutaneous Enlite sensor had the greatest microvessel density at earlier timepoints, while also having the greatest inflammatory cell density. However, at later timepoints, microvessel density decreased somewhat as inflammation increased somewhat. Finally, analysis of sensor performance showed significant sensor failure at longer timepoints. Sensitivity decreased somewhat for all sensors except for the non-diabetic Enlite sensor, which in general had greater overall sensitivity in comparison to the non-diabetic Sof sensor. Lag time was relatively similar among all sensor types, tissue types, and over time. MARD values were considerably lower for diabetic sensors for the Day 1 bolus, but were generally similar for all sensors at the 1-week bolus. These results suggest that the diabetic foreign body response, while somewhat decreased, is not significantly different than that in non-diabetic tissue. In addition, the design of the EnliteTM and Enlite 2TM sensors promoted a more aggressive inflammatory response despite being smaller and more flexible in design. Most evident from the results was the presence of a chronic inflammatory response adjacent to the percutaneously-implanted sensors, which likely contributed to the high rate of sensor failure over time.