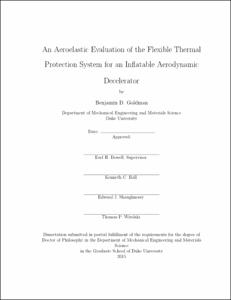 The purpose of this dissertation is to study the aeroelastic stability of a proposed flexible thermal protection system (FTPS) for the NASA Hypersonic Inflatable Aerodynamic Decelerator (HIAD). A flat, square FTPS coupon exhibits violent oscillations during experimental aerothermal testing in NASA's 8 Foot High Temperature Tunnel, leading to catastrophic failure. The behavior of the structural response suggested that aeroelastic flutter may be the primary instability mechanism, prompting further experimental investigation and theoretical model development. Using Von Karman's plate theory for the panel-like structure and piston theory aerodynamics, a set of aeroelastic models were developed and limit cycle oscillations (LCOs) were calculated at the tunnel flow conditions. Similarities in frequency content of the theoretical and experimental responses indicated that the observed FTPS oscillations were likely aeroelastic in nature, specifically LCO/flutter.

While the coupon models can be used for comparison with tunnel tests, they cannot predict accurately the aeroelastic behavior of the FTPS in atmospheric flight. This is because the geometry of the flight vehicle is no longer a flat plate, but rather (approximately) a conical shell. In the second phase of this work, linearized Donnell conical shell theory and piston theory aerodynamics are used to calculate natural modes of vibration and flutter dynamic pressures for various structural models composed of one or more conical shells resting on several circumferential elastic supports. When the flight vehicle is approximated as a single conical shell without elastic supports, asymmetric flutter in many circumferential waves is observed. When the elastic supports are included, the shell flutters symmetrically in zero circumferential waves. Structural damping is found to be important in this case, as "hump-mode" flutter is possible. Aeroelastic models that consider the individual FTPS layers as separate shells exhibit asymmetric flutter at high dynamic pressures relative to the single shell models. Parameter studies also examine the effects of tension, shear modulus reduction, and elastic support stiffness.

Limitations of a linear structural model and piston theory aerodynamics prompted a more elaborate evaluation of the flight configuration. Using nonlinear Donnell conical shell theory for the FTPS structure, the pressure buckling and aeroelastic limit cycle oscillations were studied for a single elastically-supported conical shell. While piston theory was used initially, a time-dependent correction factor was derived using transform methods and potential flow theory to calculate more accurately the low Mach number supersonic flow. Three conical shell geometries were considered: a 3-meter diameter 70 degree shell, a 3.7-meter 70 degree shell, and a 6-meter diameter 70 degree shell. The 6-meter configuration was loaded statically and the results were compared with an experimental load test of a 6-meter HIAD vehicle. Though agreement between theoretical and experimental strains was poor, circumferential wrinkling phenomena observed during the experiments was captured by the theory and axial deformations were qualitatively similar in shape. With piston theory aerodynamics, the nonlinear flutter dynamic pressures of the 3-meter configuration were in agreement with the values calculated using linear theory, and the limit cycle amplitudes were generally on the order of the shell thickness. Pre-buckling pressure loads and the aerodynamic pressure correction factor were studied for all geometries, and these effects resulted in significantly lower flutter boundaries compared with piston theory alone.

In the final phase of this work, the existing linear and nonlinear FTPS shell models were coupled with NASA's FUN3D Reynolds Averaged Navier Stokes CFD code, allowing for the most physically realistic flight predictions. For the linear shell structural model, the elastically-supported shell natural modes were mapped to a CFD grid of a 6-meter HIAD vehicle, and a linear structural dynamics solver internal to the CFD code was used to compute the aeroelastic response. Aerodynamic parameters for a proposed HIAD re-entry trajectory were obtained, and aeroelastic solutions were calculated at three points in the trajectory: Mach 1, Mach 2, and Mach 11 (peak dynamic pressure). No flutter was found at any of these conditions using the linear method, though oscillations (of uncertain origin) on the order of the shell thickness may be possible in the transonic regime. For the nonlinear shell structural model, a set of assumed sinusoidal modes were mapped to the CFD grid, and the linear structural dynamics equations were replaced by a nonlinear ODE solver for the conical shell equations. Successful calculation and restart of the nonlinear dynamic aeroelastic solutions was demonstrated. Preliminary results indicated that dynamic instabilities may be possible at Mach 1 and 2, with a completely stable solution at Mach 11, though further study is needed. A major benefit of this implementation is that the coefficients and mode shapes for the nonlinear conical shell may be replaced with those of other types of structures, greatly expanding the aeroelastic capabilities of FUN3D.