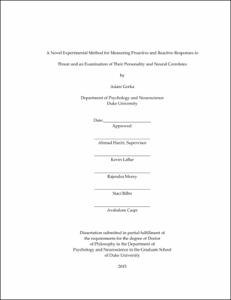 The goal of this dissertation is to characterize goal directed proactive behavioral responses to threat as well as reactive responses to threat exposure, and to identify the neural and personality correlates of individual differences in these responses. Three specific studies are reported wherein participants completed a novel shock avoidance paradigm while concurrent measures of behavioral, muscular, and sympathetic autonomic activity were collected; self-report was used to measure mood and trait personality; and blood oxygen-level dependent functional magnetic resonance imaging (BOLD fMRI) was used to measure individual differences in threat-related amygdala reactivity and intrinsic connectivity within the corticolimbic circuit.

Results from Study 1 demonstrate that during threat exposure, participants exhibit increased avoidance behavior, faster reaction times, and increased muscular and sympathetic activity. Moreover, results demonstrate that two broad patterns characterize individual differences in how participants respond during avoidance: 1) a generalized tendency to exhibit magnified threat responses across domains; and 2) a tendency to respond either with proactive behavioral responses or reactive autonomic responses. Heightened state anxiety during the shock avoidance paradigm, and increased trait anxiety were both associated with the generalized tendency to exhibit magnified threat responses. However, gender moderated the relationship between trait anxiety and generalized increases in threat responses during avoidance, such that only male participants exhibited a positive relationship between these two factors. Study 2 demonstrates that intrinsic connectivity between the dorsomedial prefrontal cortex and centromedial region of the amygdala prospectively predicts whether participants will respond proactively or reactively during active avoidance. Finally, Study 3 provides evidence that responses to threat-related facial expressions within the centromedial region of the amygdala are associated with more reactive and less proactive responses during avoidance.

These results demonstrate that patterns observed in animal models of avoidance, specifically the competition between proactive and reactive responses to threat cues, extend to human participants. Moreover, our results suggest that while anxious mood during performance and heightened trait anxiety are associated with a generalized facilitation of threat responses across domains, measures of neural circuit function within the corticolimbic system predict whether individuals will exhibit increased proactive or reactive responses during active avoidance. In addition to facilitating the search for the neural processes underlying how the brain responds dynamically to threat, these results have the potential to aide researchers in characterizing the symptoms and neural processes underlying anxiety disorders.