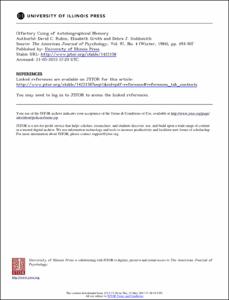 View / Download
1.5 Mb
Date
Authors
Rubin, DC
Groth, E
Goldsmith, DJ
Repository Usage Stats
172
views
1,094
downloads
Abstract
In Experiment 1, subjects were presented with either the odors or the names of 15 common objects. In Experiment 2, subjects were presented with either the odors, photographs, or names of 16 common objects. All subjects were asked to describe an autobiographical memory evoked by each cue, to date each memory, and to rate each memory on vividness, pleasantness, and the number of times that the memory had been thought of and talked about prior to the experiment. Compared with memories evoked by photographs or names, memories evoked by odors were reported to be thought of and talked about less often prior to the experiment and were more likely to be reported as never having been thought of or talked about prior to the experiment. No other effects were consistently found, though there was a suggestion that odors might evoke more pleasant and emotional memories than other types of cues. The relation of these results to the folklore concerning olfactory cuing is discussed.
Type
Journal article
Subject
Cues
Humans
Imagination
Memory
Mental Recall
Smell
Speech Perception
Visual Perception
Permalink
https://hdl.handle.net/10161/10172
Collections
More Info
Show full item record