The role of stimulus salience and attentional capture across the neural hierarchy in a stop-signal task. 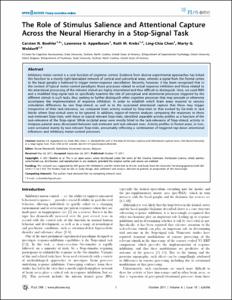 Files
Published version
870.3 Kb
Published version
870.3 Kb
Published version
870.3 Kb
Date
Authors
Boehler, Carsten N
Appelbaum, Lawrence G
Krebs, Ruth M
Chen, Ling-Chia
Woldorff, Marty G
Repository Usage Stats
177
views
159
downloads
Abstract
Inhibitory motor control is a core function of cognitive control. Evidence from diverse experimental approaches has linked this function to a mostly right-lateralized network of cortical and subcortical areas, wherein a signal from the frontal cortex to the basal ganglia is believed to trigger motor-response cancellation. Recently, however, it has been recognized that in the context of typical motor-control paradigms those processes related to actual response inhibition and those related to the attentional processing of the relevant stimuli are highly interrelated and thus difficult to distinguish. Here, we used fMRI and a modified Stop-signal task to specifically examine the role of perceptual and attentional processes triggered by the different stimuli in such tasks, thus seeking to further distinguish other cognitive processes that may precede or otherwise accompany the implementation of response inhibition. In order to establish which brain areas respond to sensory stimulation differences by rare Stop-stimuli, as well as to the associated attentional capture that these may trigger irrespective of their task-relevance, we compared brain activity evoked by Stop-trials to that evoked by Go-trials in task blocks where Stop-stimuli were to be ignored. In addition, region-of-interest analyses comparing the responses to these task-irrelevant Stop-trials, with those to typical relevant Stop-trials, identified separable activity profiles as a function of the task-relevance of the Stop-signal. While occipital areas were mostly blind to the task-relevance of Stop-stimuli, activity in temporo-parietal areas dissociated between task-irrelevant and task-relevant ones. Activity profiles in frontal areas, in turn, were activated mainly by task-relevant Stop-trials, presumably reflecting a combination of triggered top-down attentional influences and inhibitory motor-control processes.
Type
Journal article
Subject
Attention
Behavior
Brain
Brain Mapping
Female
Humans
Magnetic Resonance Imaging
Male
Nerve Net
Physical Stimulation
Task Performance and Analysis
Young Adult
Permalink
https://hdl.handle.net/10161/10642
Published Version (Please cite this version)
10.1371/journal.pone.0026386
Publication Info
Boehler, Carsten N; Appelbaum, Lawrence G; Krebs, Ruth M; Chen, Ling-Chia; & Woldorff, Marty G (2011). The role of stimulus salience and attentional capture across the neural hierarchy in a stop-signal task. PLoS One, 6(10). pp. e26386. 10.1371/journal.pone.0026386. Retrieved from https://hdl.handle.net/10161/10642.
This is constructed from limited available data and may be imprecise. To cite this article, please review & use the official citation provided by the journal.
Collections
More Info
Show full item record Professor in Psychiatry and Behavioral Sciences
Dr. Woldorff's main research interest is in the cognitive neuroscience of attention. At each and every moment of our lives, we are bombarded by a welter of sensory information coming at us from a myriad of directions and through our various sensory modalities -- much more than we can fully process. We must continuously select and extract the most important information from this welter of sensory inputs. How the human brain accomplishes this is one of the core challenges of modern cognitive neuro
Alphabetical list of authors with Scholars@Duke profiles.